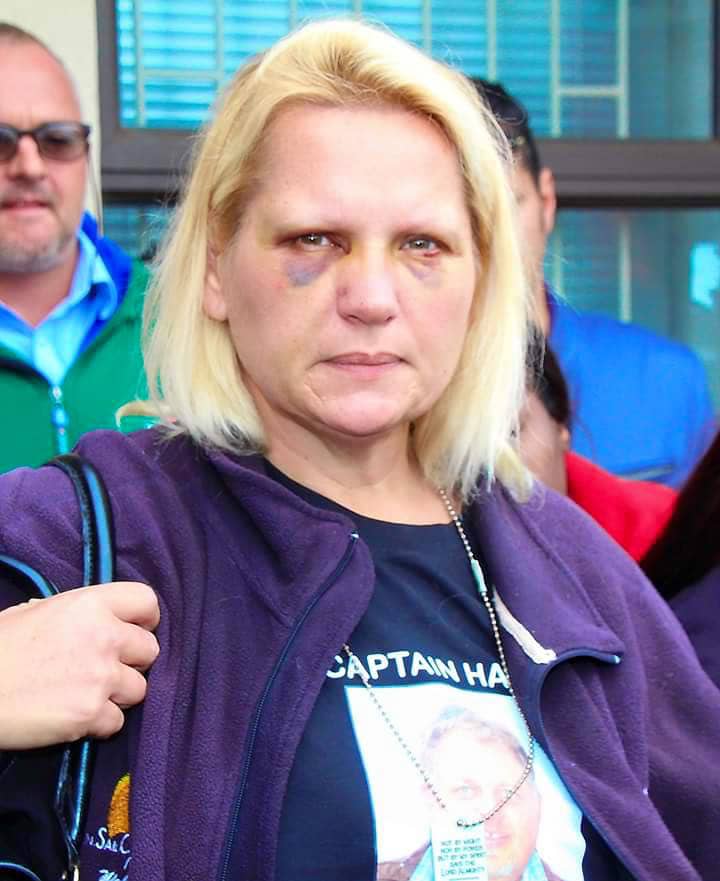 The widow of Walvis Bay businessman, Hans-Jorg Möller, who was killed during a daring robbery when he came to the defence of his wife and children during the early morning hours of 17 June 2016, narrated her ordeal in the Windhoek High Court yesterday.

Carol-Ann Möller, who sustained brain damage during the assault on her, is suffering from impaired movement and a continuous tremor, caused by the sustained vicious and brutal attack on her, allegedly by David Tashiya (33) and David Shekudja (39).

Yesterday, Carol-Ann was steadfast in her testimony, implicating the five men in the offence.

According to her, she was about to fall asleep when she heard the security gate to their front door breaking open, and she went to investigate.

When she arrived at the entrance to their home, she switched on the light and shouted, “Who’s there?” – and the next moment, three men broke through her front door.

She then ran to her children’s bedroom to stop them from entering it and blocked the door while holding on to the door with hands, Carol-Ann narrated.

At that stage, she said, Shekudja – whom she identified in court – started hitting her in the face with his clenched fist – in the process breaking her nose and several teeth – in order for her to let go of the door, and shouted at her to shut up or he would kill her.

She further testified that Tashiya then joined in the assault on her, beating her mercilessly all over her upper body while shouting, “Who is in there… who is in there?”

Carol-Ann, who at one stage got too emotional to continue her testimony, causing Judge Dinnah Usiku to order a break for several minutes, told the court that she made mental notes on how to identify the perpetrators while they were beating her by remembering features on their appearances, such as the shape of their faces and the clothes they wore.

She further said her husband then came with a wooden chair and beat her attackers away from her – and the next moment, she just heard a gunshot and saw her husband going down on the floor.

“I then looked to my right-hand side and saw accused one (Panduleni) standing there, holding a pistol about waist high, aimed at my husband – and [I] told him, ‘you shot my husband’, and he just looked at me and said ‘shut up or I will kill you too’,” she said.

She further told the court that Shekudja and Tashiya then continued with their assault on her and her husband begged them to stop and just take what they want and leave.

She then took them to the office in the house, where she opened two safes and other items, including her husband’s wallet and her jewellery.

Thereafter, they tied her up – and after ransacking the house, all of them left and she managed to wiggle out of the restraints and summon for help, she stated.

Möller was then transported to a hospital, where he succumbed the next day due to gunshot injuries he sustained.

According to the charge sheet, the accused planned during June 2016 to break into the residence of the Möller family, and to rob money and other valuable items from them, armed with knives, firearms and other dangerous weapons.

According to the State, the five accused acted with a common purpose.

They remain in custody.