Namibian trade increased by close to N$30 billion in 2021 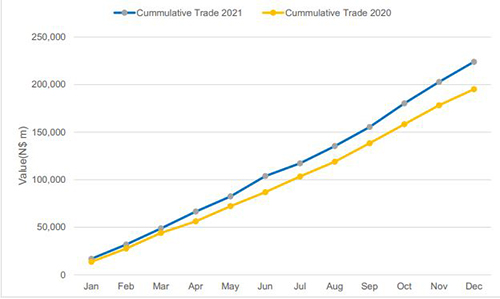 Namibia’s trade activities increased significantly for the period of January to December 2021 when compared to the same period of 2020.

The latest figures, published by the Namibia Statistics Agency (NSA) in their monthly trade bulletin for December, were released yesterday.

They indicate that the cumulative total trade, import plus export figures for January 2021 to December 2021 stood at N$223.8 billion. This is compared to N$195.1 billion recorded in 2020.

NSA CEO Alex Shimuafeni stated that for the month of December 2021, Namibia’s export earnings stood at N$9.3 billion, which is a decrease of 3.8% on a monthly basis, while the imports bill amounted to N$11.7 billion, down by 9% on a monthly basis. This resulted in a trade deficit of N$2.4 billion, which is an improvement from the trade deficit of N$3.2 billion recorded in November 2021.

According to Shimuafeni, international merchandise trade plays a crucial role in economic development as it links producers and consumers located in different countries into a global economic system.

During the month of December 2021, Namibia’s top five export partners were China, South Africa, Botswana, the USA and France. These top five markets accounted for 72.2% of Namibia’s total exports, up from 69.8% witnessed in November 2021, and 65.6% recorded in December 2020.

Furthermore, copper blister remained Namibia’s largest export commodity during the month under review, accounting for 34.4% of total exports mainly destined for China. This was followed by precious stones (diamonds), which accounted for 13.1% of total exports destined mostly for Botswana, the UAE, Belgium and Hong Kong. Uranium was ranked third on the list with a market share of 11.1% that was destined for China, France and Canada.

“An analysis of the importation of skincare products as the commodity of the month showed that in December 2021, Namibia imported skincare products valued at N$38.5 million, with 88.8% sourced from South Africa”.