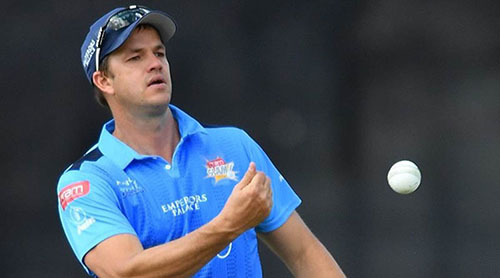 Morkel speaks to ESPNcricinfo about Namibia at the T20 World Cup.

Namibia have had a great start to their first T20 World Cup. How special was it to progress to the Super 12s and start that stage with a win over Scotland?

I think it has exceeded all expectations. The way we entered the Super 12s after being well beaten by Sri Lanka – really blown away on that night – and to come back the way we did. Both matches against Ireland and Netherlands were high-pressure matches and obviously on a small nation like Namibia, there will always be pressure to perform. The guys stood up to the test and, yes, we qualified to the Super 12s.

The game against Scotland in our eyes was another big one. If you want to look at Associate cricket, Scotland, Ireland (they became a full member in 2017, alongside Afghanistan) and Netherlands - they are probably the big three if you want to call them that. And to win against them [Scotland] in the Super 12s is another fantastic effort by the boys

What would this World Cup run mean to the next generation of Namibian cricketers?

Guys are really going out and supporting the live matches at certain venues in Windhoek and around Namibia, and that's great to see. But you must remember that cricket was sort of a dying sport for the last 18 years in Namibia after the last time they featured in a World Cup in 2003.

So, in the last three years, people started watching cricket again, talking about it because the team really did well and it started with getting their ODI status in 2019 again, and then having good qualifiers in Dubai for this tournament. And we sort of kept that momentum going and I think it’s a massive inspiration in Namibia again. As a young kid, you want to associate yourself with a national hero and that’s what these guys have achieved in the last three years. They’ve become national heroes and I’m sure it’s going to stand Cricket Namibia in good stead for the future.

You and De Bruyn go back a long way. How has your partnership with him been like, this time at the backroom?

Look, we played professional cricket together for many years - first at Easterns and later on at the Titans. We were always good cricket teammates; we sort of played the same brand of cricket as well. I think we really complement each other. Our personalities are a little bit different, but we definitely complement each other. So, it has really been good and you can only enjoy something if you are really successful and as I said earlier it was a long process, but for the last three years Cricket Namibia kept on raising the bar and they kept on winning more games. And as backroom staff that’s what you look for and get your satisfaction out. So, it has been a great journey for me.

What do you think is your strength as a coach?

Look, it's definitely a learning experience for me. I went into coaching without having any experience. All I went with is the experience that I picked up as a player. So, I still try and instil that in the way that I coach. Stuff that I never enjoyed playing cricket...I’m not going to all of a sudden enforce on other people or players. So that’s my philosophy. I try to stay up with the trends, I try to be okay with things changing and adapting to that. So, as I said, I try to create an environment where cricketers can grow on and off the field. I don’t believe in the way of treating players where they are not allowed to develop as human beings. And it’s important for me to sort of keep that across the board.

Namibia’s players and staff have been in a bubble for several weeks. Has the management addressed the mental health and well being of the side?

I think that is very challenging for not only players but for management and coaching staff as well. That was something I experienced for the first time in my life and I must admit I don't think it's sustainable, especially these long bubbles. You must keep in mind that we flew out to Dubai on the 25th of September, so by the end of the tournament, we will be spending about 48 days in a bubble. So, it’s pretty tough and it’s certainly not natural.

As a cricketer, there’s so much pressure on you anyway; if there’s no way to release that away from the game, then it just keeps building up and building up. So, I think it’s something that hopefully we will see the end of very soon and like I said, I don’t think it’s sustainable in the long run - just talking to the players who have really struggled. The element of play and go away from the game is not there anymore and it’s tough to deal with.

We don’t have many options. Luckily the hotel we stay in at the moment in Abu Dhabi has a small private beach, so we’ve got access to it. The guys mostly spend some time in the water, throwing a ball or bouncing a ball across the water, and we’ve also done a few quiz nights, which was quite good. Other than that, not much time; we try and watch some of the games together as a team. A few other guys have table-tennis tables. You could still keep yourself busy but on a long tour, you sort of run out of ideas.

How did you and De Bruyn put this team together despite having only a limited pool of players?

That's the thing. You only have so much to work with. We've got 18 contracted players, if I'm not wrong. A lot of credit must go to Pierre, like I said, for the vision that he had – upskilling the guys, and I think that was the most important part of building this team. The players worked really hard to upskill their games, to get to that level to be able to perform in a World Cup and that doesn’t happen overnight. Three years of work in progress. We had limited playing opportunities during the Covid times, so it was tough to keep the guys’ morale and their love for the game up. I’m sure it’s tough for all teams, but like I said we’ve got a very small pool to pick from and to keep these guys interested and keep upskilling them was a massive challenge.

The opportunity to bring David [Wiese] and Ruben [Trumpelmann] in came through discussions. We realised that they had family in Namibia and they can qualify for passports. It’s not an easy process, though, in Namibia. So, it took a good eight-nine months for them to get their papers and passports ready. They are two high-performance players. One is a strike bowler and one is an amazing allrounder - two key ingredients you need in a team. So, hopefully, we can see more performances from them against the bigger sides.

How did you manage to convince David Wiese to come and play for Namibia?

Post-Brexit, his other option was to go and play for South Africa again in domestic structures, but playing for Namibia gives him access to international cricket once again. He now has access to playing in a World Cup. He has a chance to be in the eyeballs of a billion people and the performances he has put in at the World Cup so far have definitely upped his brand again. That’s the advantage of playing international cricket. If he decided to go and play domestic cricket in South Africa, that would’ve never happened for him.

Gerhard Erasmus, the captain, broke his finger during the warm-ups, but has soldiered on. What do you make of his resolve?

He's a massive player for us. He›s the leader and a well-respected player. When he injured his finger during the warm-up games, it was a massive blow for us. The initial report from the specialist was for him to return home for an operation. And he will still get that when he's back but he has decided to stay on, and our medical staff is managing that finger as best as we can. So far, his decision to stay on has really paid off. He›s an inspirational leader and he’s put together a few great performances and hopefully, that finger can stay intact for another few games. Then, he’ll probably head home to the [operation] theatre and a long recovery period.

How has the Richelieu franchise T20 tournament in Namibia helped the players?

They are trying to spread out the level of strength a little bit. The players are mixed between the teams; so, I think, it's still in the early stages. The one challenge that we still have in Namibia is our club cricket›s standard is not what we need to improve our players because we must remember there is nothing in between. It's a good initiative and hopefully, we can get a stronger pool and maybe we can get a few fringe players from South Africa to really up the level of competition in the tournament. Then, I think it will be even better.