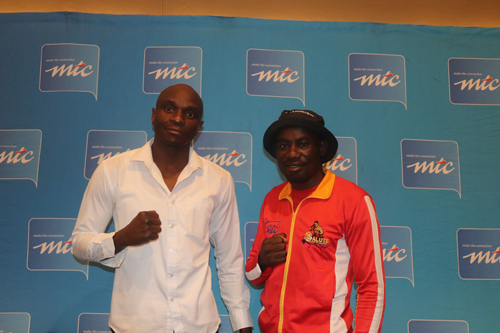 Local middleweight veteran boxer Lukas ‘The Demolisher’ Ndafoluma and Nathaniel ‘Natty’ Kakololo will this month be back in action when they headline the much-anticipated ‘The Demolisher’s Time’ Boxing Bonanza.

The bonanza will be staged by the MTC Salute Boxing Academy on Saturday, 27 February, at the Windhoek Country Club Resort and Casino. Old-time campaigner Ndafoluma and the budding Kakololo will be the two main actors on the night, as they will rumble it out for titles.
The 35-year-old Ndafoluma will square off against Malawi’s Simeon Tchete for the vacant WBO Africa middleweight title, while 31-year-old Kakololo will defend his African Boxing Union (ABU) featherweight title against Zimbabwean journeyman Tinashe Mwadziwana.

During yesterday’s official launch of the ‘The Demolishers Time’ Boxing Bonanza in the capital, Ndafoluma said he is well prepared and ready to face his Malawian opponent, saying it is a great honour for him to be fighting for a continental title.

“It has been a dream true for me to be fighting for this title. I am very grateful for the opportunity and I am ready for this fight, despite not knowing much about my opponent. But all I can say is I am ready; I am going to show him how ready and grateful I am to be fighting for the title when we meet in that ring,” said a confident Ndafoluma, who boasts a record of 18 wins and three loses from 21 professional fights.
On his part, Kakololo also sent a clear warning to Mwadziwana, cautioning the Zimbabwean to surrender any hopes or thoughts of coming to Namibia and walking away with his title.

“I have seen this guy winning a few fights here in Namibia and now he still has the audacity of wanting to come here and challenge for my title; that will not happen, and his dream will not materialize, because come the 27th of this month, I will remain the champion,” cautioned Kakololo.
The bonanza will also see another nine bouts featuring promising talents, mostly from the MTC Salute Boxing Academy, who will all be in action on the night, showcasing their talents and striving for top honours.

In the super lightweight division, Nestor Amukotoh will be in action against Andreas Nghinaunye over four rounds and Jonas Erastus will complete the undercards lineup with a bout against Thomas Gabriel.
- mkambukwe@nepc.com.na