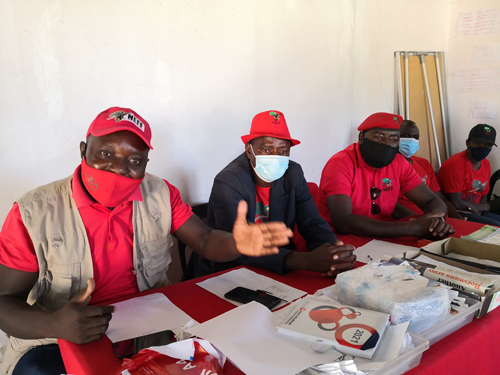 OSHAKATI – The Namibian Economic Freedom Fighters (NEFF) party says it will consult other opposition parties with the view to declare a vote of no confidence in the current administration over the Fishrot scandal.

The international fisheries bribery scandal has led to the arrest of high-profile individuals such as former Cabinet ministers Bernhard Esau and Sacky Shanghala. According to NEFF national coordinator and parliamentarian Kalimbo Iipumbu, the current top administration in government should step down.

President Hage Geingob has chosen not to comment on the corruption scandal but yesterday once again indicated he will at an appropriate time address ‘insinuations’ linking him to it, “with the view to demonstrating their falsity”.
The ruling Swapo has also in the past denied ever benefiting from the Fishrot scandal.

“Fishrot, this is a scandalous and satanism activity that needs all support from Namibians to say to the current leaders of the government. Namibians have to starve to pave ways for the well-connected few, whereas we have a nation that needs developmental programmes to make ways for the living standards.”

Equally, NEFF called for the establishment of a commission of inquiry to investigate, amongst others, the mass housing programme, the cost of the fuel storage facility at Walvis Bay, the construction of the Neckartal Dam and contracts dished out to D&M Rail over the years.
– nashipala@nepc.com.na