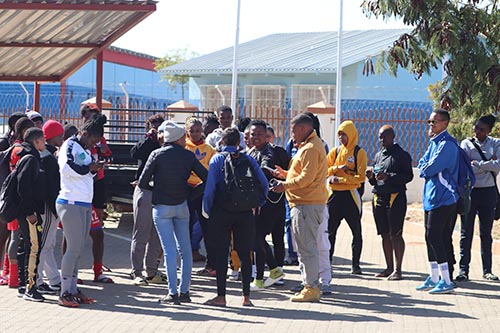 A large group of Brave Gladiators players, as the national women’s team is known, refused to train in the morning and gathered at the gates of Football House.

They stood there for over two hours before the association’s leadership attended to their grievances.

Namibia is currently preparing to partake in the upcoming Cosafa Women’s Championship, slated for Port Elizabeth, South Africa from 31 August to 11 September 2022. But, the players yesterday threatened to leave the training camp until their demands and concerns are addressed by the NFA.

They are demanding that the NFA at least pay sthem half of what is owed to them, and thereafter make proper arrangements on how the remaining money will be paid. The players stressed that they can no longer afford taxi money to come to training every day from home, and that their families are now suffering due to their lack of income and unpaid wages.

After hours of protesting, NFA’s interim secretary general Jochen Traut and his management team only came out of their air-conditioned offices hours later to meet the disgruntled players, who had to brave the chilly and windy weather outside.

One of the senior players, Annouschka Kordom, who spoke on behalf of the striking group, said it was agreed with the NFA’s leadership that the players should return to camp while the association makes plans to pay them at least half of their money within the coming week or two.

“We are having a protest in request for the outstanding wages owed to us. It was supposed to be paid by the end of the month, but nothing has happened. The money dates back to September 2021, so we are being owed for six games in total. We have not received any sort of payment from the association. We can’t afford taxi money to come here every day, and it is getting hard for us and our families. We also have people whom we look after,” Kordom told New Era Sport at the scene of the protest.

“We had a discussion with the secretary general, who told us that we should give him a week because there is no money for now, and he is new and the technical team is new. He promised that they will figure out a way to get the money being owed to us,” said another player, Tomalina Adams, who was also part of the meeting with the FA leadership.