Home / No birth certificate, no education

No birth certificate, no education 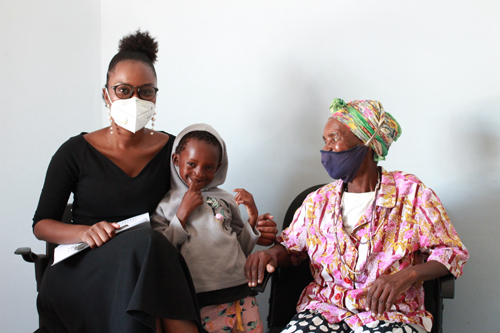 An eight-year-old girl from Tobias Hainyeko constituency in the Khomas region could not secure placement in any school because she has no birth certificate.

Naapopye Erastus and her two siblings lost their mother in 2019, while their father’s whereabouts are unknown.
She has been staying with her grandparents since then, whose efforts of registering them at home affairs for a birth certificate proved futile.

According to the 58-year-old grandmother Verena Simon, she was not able to register her granddaughter for school because to get admitted to a school, an abridged birth certificate or identity document is required.

“I have made repeated attempts over the past two years to register her using the birth passport card obtained from the nearby hospital, but the child could not be admitted. The home affairs staff have been mistreating me and I gave up attempting to get the certificate,” an emotional Simon explained.

Simon said that she was very much disappointed by the way home affairs officials treated her as an elderly taking care of orphans and who is trying to acquire documents for innocent children. “The last time I saw the children’s father was in 2019 during the passing of their mother. From there, he disappeared. We had his phone number, but he never picks up calls or talks to us regarding the children. We later lost his number,” she explained.

Erastus was born with a cleft lip condition and was operated by a female doctor only known as Caroline.
“We are appealing for that doctor to come forth to issue us with a declaration letter that indicates that Erastus is disabled and qualified for the special grant. The letter is also part of the requirement needed by the ministry of gender to register Erastus for the social grant,” said Simon.

Good Samaritan chips in
Meanwhile, a good Samaritan Catrine Jacob came to the rescue of the family to ensure all the relevant documents are secured for processing at home affairs.

Jacob who met Erastus when she was carrying out her Christmas charity project last December said she was touched by her story and decided to volunteer to assist her to acquire the birth certificate.

“The guardian who is the grandmother said she went for birth certificate registration multiple times, through the councillor’s office, but was sent back home with no assistance. I previously worked in Ohangwena region, where I also researched the undocumented people and coming from that background, I understood the struggle of getting a birth certificate and I have decided to take on this responsibility to help Naapopye get a birth certificate,” narrated Jacob.

Jacob decided to spend the day getting the home affairs requirements to get her a special school admission.
She pleaded to school authorities to place Erastus in grade 1 because she has already attended pre-primary school.
The grandmother is unemployed and still does not qualify for the monthly old-age pension grant, while Erastus cannot benefit from a social grant because she has no birth certificate.
- ljason@nepc.com.na