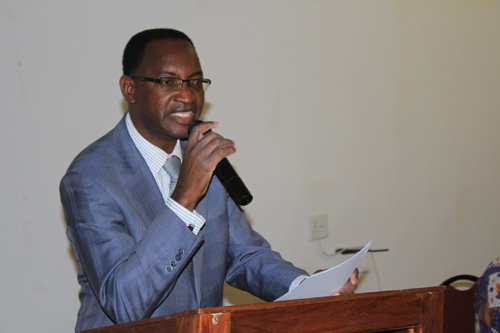 Both Noa and Van der Merwe’s terms ended on 31 December 2020 after having been at the helm of the anti-graft agency since its inauguration in February 2006.
Speaking to New Era, Noa thanked the President for his continued trust in him to continue leading the ACC, saying he and his deputy will continue to serve the public to the best of their abilities.

“For the time that we have been given, we will focus on finalising cases that are still pending and work on those that are still yet to come. We want to make sure that when we leave, we have made progress,” noted Noa.
On whether he plans on leading the institution for another five years, Noa said he will cross that bridge when he gets there. In a statement, the Presidency said the temporary appointments of Noa and Van der Merwe were made to allow for nomination and appointment of the two most senior vacancies at ACC.

“Because the National Assembly is in recess, the head of state made the appointments by the powers vested in the President by section 10 (2) of the Anti-Corruption Act, No. 8 of 2003 as amended,” reads the statement. The acting appointments of Noa and Van der
Merwe are effective from 1 January until 30 June. The ACC is currently preoccupied with the highly publicised Fishrot scandal which allegedly involves bribes amounting to over N$150 million, reportedly paid by Samherji, one of Iceland’s largest fishing companies, in return for preferential access to Namibia’s fishing grounds.

The corruption case, which implicates among others former Cabinet ministers Bernhard Esau and Sacky Shanghala, has been transferred to the High Court, with a pre-trial appearance scheduled on 22 April this year.
-mamakali@nepc.com.na