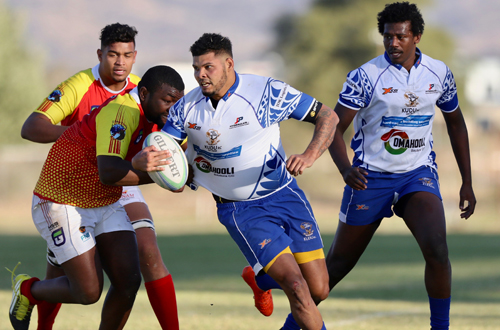 The Namibia Rugby Union (NRU) is still hard at work sourcing for a principle sponsor for the country’s Premier Rugby League, which has been without a headline sponsor for more than eight years now.

NRU interim CEO Theo Grunewald yesterday told New Era Sports that the union’s leadership has been hard at work, talking to various corporates with hope of securing a headline sponsor for the country rugby premiership.

With the local rugby league activities set to fully return in April, the NRU is hoping to secure a sponsor before activities get rolling countrywide.
“We are still working on securing sponsorship for the premier league, although it’s a bit challenging to get a sponsor at this point in time and Covid-19 has also made it worse for everyone. We are also waiting on the government to hopefully relax some measures with regards to Covid-19, as that will also help boost our chances of getting a sponsor. At the moment, we are not sure when contact sports will fully return to action and have spectators at the stadiums – so until we have the answers all those questions, approaching a potential sponsor will remain challenging, as we have nothing to put on the table,” he said.

Asked as to how many teams the premier league will accommodate this year, Grunewald said it is yet to be decided upon but a final decision will, however, be made at the NRU’s upcoming annnual general meeting set to be held on 27 March.
- mkambukwe@nepc.com.na