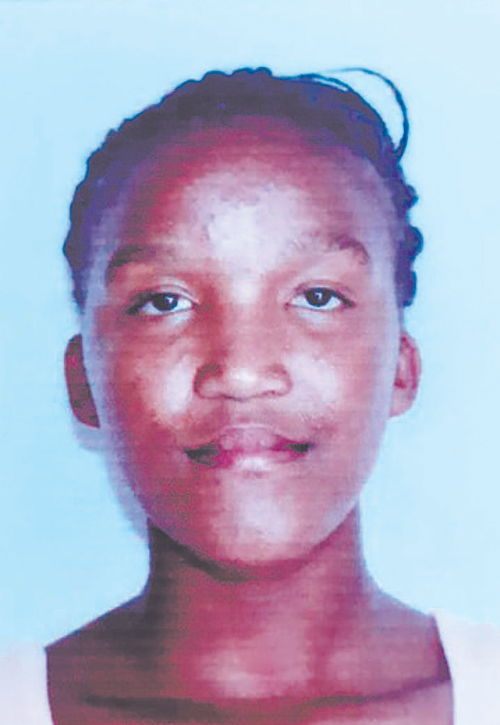 WALVIS BAY – The distraught parents of a missing Walvis Bay teenager have made an emotional plea to their daughter to return home.
Blessing Hanganda (15) went missing on 2 January from their Narraville home in Walvis Bay.  The teenager’s father, Gerson Hanganda, yesterday told New Era they were worried that she might have been mixed up with the wrong crowd; that could also prevent her from coming home.

According to Hanganda, Blessing, a former learner of Tutaleni Primary School, only live with him and her mother.
He said their daughter went missing the same day the family returned from holiday.
“She was dressed in a pink sleeping gown when she left home around 20h00 while I was in the shower. She told her mother that she was going to the shop and will be back in a few minutes,” Hanganda recounted.

He added he still contacted her the next day on her phone, whereby they spoke and he pleaded with her to come home.
“That was the last time we had any contact with her,” he said.

Hanganda now suspects she might have sold her cellphone. According to Hanganda, there has been a couple of sighting of the teenager at Swakopmund and in Kuisebmond since she went missing.
“She is still a child, a very gullible one – and I fear that the people she is with might take advantage of her. That is why we want her to come home. We are not angry; we just want her to be back home safely,” he said.

He added she might not be using her real name and might call herself Lovey and Marianna.
According to Hanganda, Blessing might be ashamed by the fact that she has been away from home this long and does not know how to come back home.

“We don’t care about anything that you did wrong.  We love you and just want you back home with us. I want you to go back to school and experience life as a normal teenager,” he appealed.

Hanganda described his daughter as a bit tall and slender teen with brown eyes.  She is also light of complexion with acne on her face.
“We love you; just come home, Blessing, please,” the desperate father appealed.
He also appealed to anyone who knows about Blessing’s whereabouts to contact him as soon as possible, as she is still a minor.
Hanganda can be contacted at 081 434 5011 and Warrant Officer Matheus Povanhu at 081 308 9159.
- edeklerk@nepc.com.na