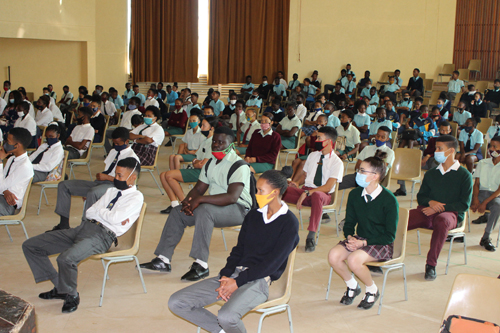 Parents of schoolgoing children have welcomed the ministry of education’s decision to delay the opening of schools for the new academic year.
On Monday, the ministry announced schools will now open on 26 January for learners, while teachers will report for duty on 16 January and not today as initially planned.

Learners were initially supposed to return to the classroom next week Monday. The announcement came in consideration of growing fears over the safety of both learners and teachers due to the prevailing second wave of Covid-19 infections.
As at yesterday, Namibia has recorded 3 885 active cases of Covid-19 and 222 deaths related to the pandemic.
Otilie Hatuikulipi, mother to a fourth grader, said the extension somehow came at the right time as she is worried about the increase of Covid-19 cases.

“I am not really bothered by the extension of the school opening. As a matter of fact, I am happy that it was extended,” she said.
“I am more worried about the cases increasing. I would have wanted them to open early February so that we can know the exact figures for January and plan accordingly. Also, I did not think properly or plan so this will give us parents enough time to get what our children need for the academic year.”

Another parent, Anna-Liisa Shaningwa, also shared her sentiments.
“Although the measures taken does not eliminate the problem at hand, we are put at ease as parents, as we were overly concerned about sending our children to school amidst the second wave of the Covid-19 pandemic, which has been proven to be more detrimental,” she said.
She further added: “I feel like schools should focus on an innovating stable online system, because younger pupils are incapable of taking precautionary measures and to contain the spread. Hopefully, a better plan will be executed come the 26th.”
According to the ministry, school management will be expected to evaluate their preparedness for the return of all learners on the proposed dates.

Furthermore, schools must meet key conditions that are mandatory pre-requisites for re-opening of schools. Also, schools are expected to communicate to the parents as to what teaching and learning mode they will make use of, either platooning, time-based cohorts, distributed groups or a combination of these, in the implementation of the curriculum.

Secretary general of the Teachers Union of Namibia (TUN) Mahongora Kavihuha also welcomed the ministry’s decision to delay opening.
He, however, noted the delay should not be a time for relaxation, but it should be time for critical dialogue and hard work.
“Despite our differences, all stakeholders need to have an open dialogue. We need to plan on the processes and modalities for opening the schools, in order to ensure the safety of both the learners and teachers,” noted Kavihuha.
-mamakali@nepc.com.na