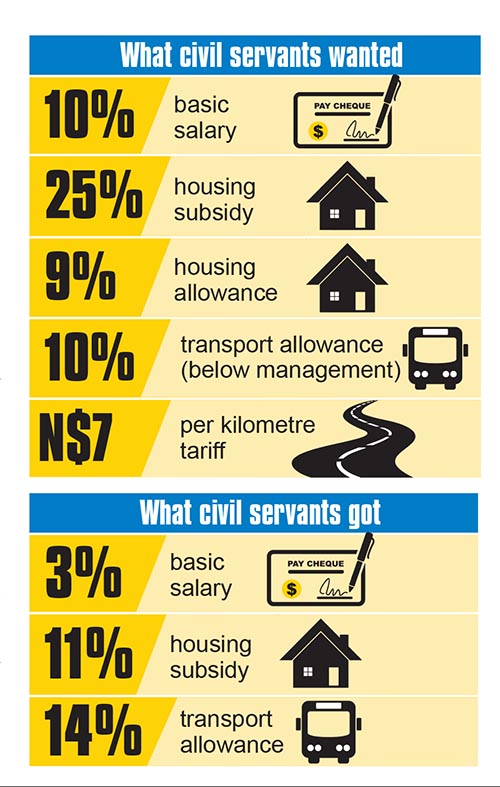 A potentially devastating strike by civil servants was averted after government and unions representing workers reached a compromise agreement, which Cabinet secretary George Simataa pronounced as “peace over money”.

According to Simataa, the consequences of the strike would have put Namibia’s hard-earned peace and stability at stake.

“Once you lose peace, you are not going to get it back. It is about peace. This country was going to go into turmoil if we did not do what we have done,” Simataa said shortly after putting pen to paper. Asked where government will get the money to cater for the increment, he said the deal is worth the risk while they figure out means to generate revenue.

“The N$924 million that you might get now would be in billions to repair what people would have lost [through the strike],” he said.

Government increased its offer from the initial N$334 million to over N$924 million, meaning a 3% basic salary across the board, housing allowance for civil servants below management by 11 % and transport allowance by 14%.

In recent years, Geingob said, fortune has not favoured Namibia, as the country has leapt from crisis to crisis in the last seven years.

He pointed to the economic downturn of 2015, which adversely affected government revenue, followed by prolonged droughts and the Covid-19 pandemic that created untold devastation to the economy and livelihoods.

“The President informed the meeting that finding a solution to the impasse was a priority, and it is for that reason an agreement was in the best interests of the workers and the country,” a statement issued by press secretary Alfredo Hengari reads.

The agreement has been lauded and criticised in equal measure. For example, the entry-level basic salary of a government cleaner is N$35 777 a year.

The amount breaks down to N$2 981 per month. With the just-announced 3% across-the-board increment for public servants, an entry-level cleaner will receive N$89 more on their next basic salary.

At the current rate, where food prices are shooting through the roof, N$89 is equivalent to two litres of cooking oil. The cleaner’s housing allowance is N$654 per month.

The 11% increment amounts to N$72, meaning the new allowance for transport stands at N$726. On the transport benefit, government employees received a 14% increment.

When negotiation started last year, Napwu and Nantu demanded an allocation of N$3 billion for salary increments from the government.

The amount was later dropped to N$1.3 billion.  When the two amounts are juxtaposed to the N$924 million settlement, rival trade union, Trade Union Congress of Namibia (Tucna), could only congratulate government’s negotiating team for annihilating the unions.

“I want to thank the head of State Hage Geingob, Simataa and the entire government negotiating team and congratulate them for destroying the opposing unions’ team,” said Tucna’s Mahangora Kavihuha in reaction to the outcome.

He said the results were a clear demonstration the two unions were serving at the behest of the ruling elite at the expense of civil servants.

“If you take 14% increment on transport of N$400, that is a N$56 increase. You can only use that for taxi three times, and the money is done,” Kavihuha continued.

From his perspective, public workers are the biggest losers.

“The yellow unions [unions in cahoots with employers] crafted together with government how to confuse public servants. If you look at [Napwu’s general secretary] Petrus Nevonga’s motivation, he is mentioning that government improved its offer from N$334 million to N$924 million,” he said.

The unionist continued: “What Nevonga is avoiding to mention is that the unions moved from N$3 billion to N$924 million. This in essence means the losers are the employees.”

Kavihuha said for as long as the majority of civil servants are represented by Swapo-affiliated unions, their best interest will never be served.

“We are frustrated by the outcome but we anticipated it. A yellow union will never produce a good deal for the workers,” he said.

Agreeing with Tucna was the Affirmative Repositioning movement.

According to AR, the union sold out the workers.

At best, he said, the union should have taken the offer “to the workers so that they can decide for themselves just as they decided to strike through a secret ballot.

“Inflation is around 8%, which is a fact that must be considered when negotiating salaries. Napwu has been consistently selling out workers. Every time when workers decide to strike, they are not consulted when they enter into a particular deal with government,” AR’s George Kambala said yesterday.

“If you take the three – basic salary, transport and housing allowances together – the low-income workers are going to benefit more than the high-income workers,” Muniaro said.

According to him, they did not come empty-handed and conceded the negotiation was complex.

Government’s precarious financial position did not help either.

“It is not a bad deal in this economy. It is understandable,” Muniaro said.