Home / ‘Phosphate can be a valuable revenue stream’

‘Phosphate can be a valuable revenue stream’ 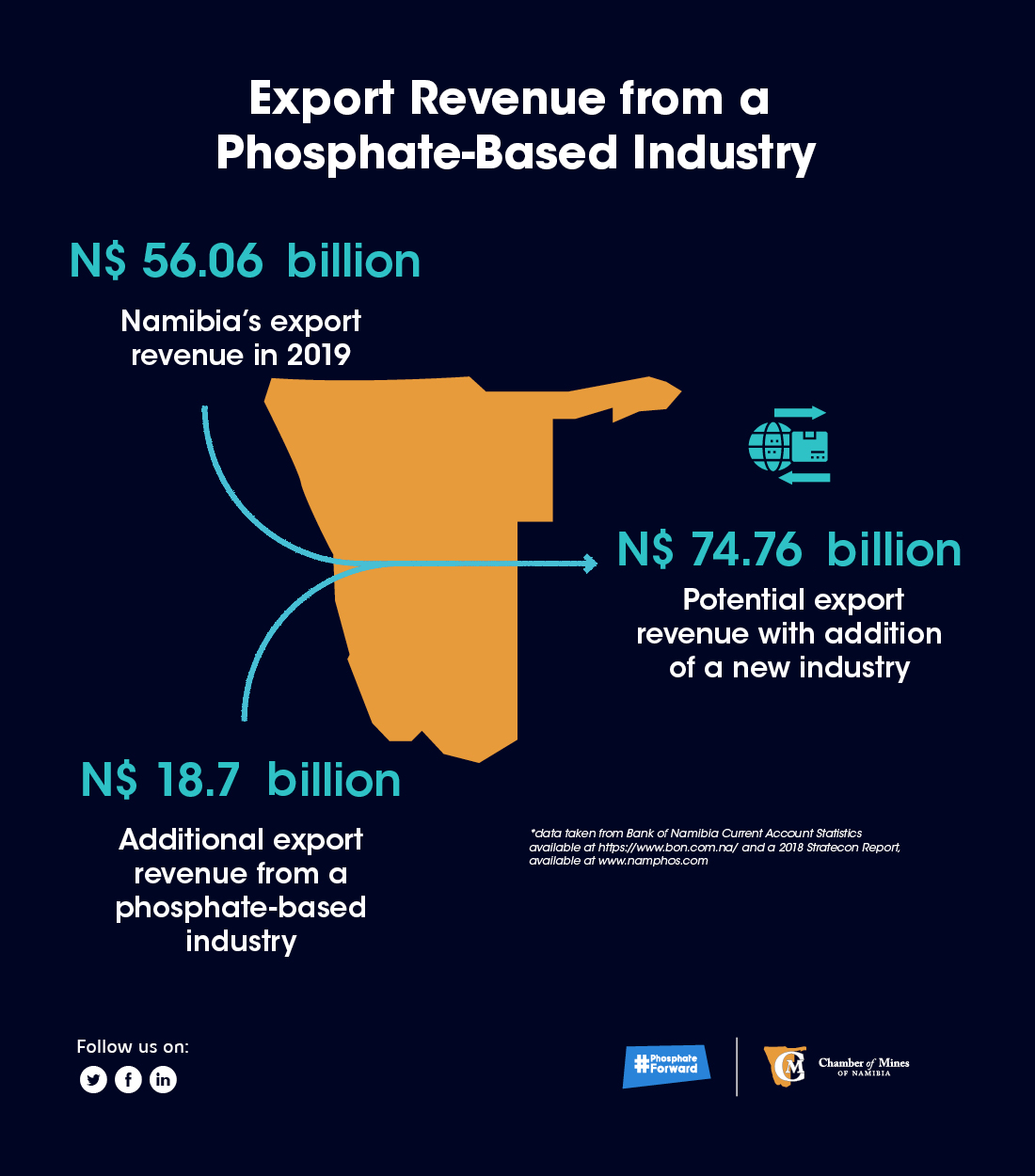 The proposed marine phosphate mining off the Namibian coast will have a minute impact on the seafloor bed and there is no reason the fishing sector and the mining sector cannot coexist.

In addition, the area where phosphate deposits occur does not coincide with any key commercial fishing in the area and the proposed seabed mining does not pose a threat to endangered or unique biodiversity in the area.

These sentiments were recently expressed by Chris Brown, CEO of the Namibian Chamber of Environment.

In a recorded interview, posted on the website of the Chamber of Mines of Namibia, Brown explained that the proposed phosphate mining area to be dredged per year is about three square kilometres, which he stated is equivalent to 0.00003% of Namibia’s seabed in the country’s exclusive economic zone.

This, said Brown, is such a small footprint that it would have virtually no impact on the country’s lucrative fishing sector.

“I have absolute confidence that we are onto a good new stream of income for Namibia that will make a great difference to the economy of the country, to job creation and at really minimal risk to the environment and the fishing sector of the country,” said Brown.

The local environmentalist further noted that experience drawn from years of marine diamond mining has shown the seabed recovers relatively quickly and much faster than terrestrial mining activities.

Said Brown: “In open areas with high energy, within eight to 10 years or even less, you can’t tell the difference between sediments and their biodiversity where there has been mining, compared to adjacent areas where there hasn’t been any mining”.

Regarding the environmental impact assessment for the proposed marine phosphate mining, Brown stated that a number of in-depth studies have been conducted.

Meanwhile, an article recently published by the Chamber of Mines of Namibia stated that developing Namibia’s marine phosphate resources, coupled with a fully integrated fertiliser industry are optimally aligned to national development agendas and to achieve the goals of Vision 2030, the fifth National Development Plan (NDP5), the Harambee Prosperity Plan, Growth at Home Policy and the Blue Economy Policy.

According to the Chamber of Mines, Namibia has one of the largest undeveloped phosphate resources in the world, the size of which is expected to support sustainable mining and related industries for more than 100 years.  The mining chamber is adamant that this scarce resource can be developed, along with associated industries, to produce a suite of fertiliser products for domestic consumption and export to the global market.

In terms of exports alone, the chamber indicates phosphate mining has the potential to generate more than N$18 billion for Namibia on an annual basis.

This is because phosphate is one of the key components in the production of fertiliser, an essential component for productive agriculture and farming activities.

Namibia currently imports the bulk of its fertiliser from South African manufacturers, which in 2018 amounted to more than half a billion Namibia dollars.

“Due to the high import costs and price of fertiliser, it is generally not an affordable item for subsistence farmers. Fertiliser that is produced locally will be available at a much lower price to commercial and subsistence farmers with significant benefits to be realised. In particular, cheaper fertiliser will result in substantial productivity gains and increases in agricultural output from the subsistence sector, along with improved food security in rural areas and less dependence on expensive food imports,” the mining chamber noted.

“Firstly, a fully integrated phosphate industry will achieve higher levels of economic integration, as the production of a final product will be locally consumed and support growth in other sectors of the economy, such as agriculture and food retail. Secondly, fertiliser production will diversify the economy and accelerate industrialisation, as it is produced from an enriched natural resource, with all downstream value addition taking place within the country’s borders,” the chamber of mines stated.  Furthermore, the local production of fertiliser also means Namibia will no longer depend on external producers for its requirements, as a phosphate industry will position the country as a net exporter of fertiliser servicing global agricultural markets.

Moreover, the envisioned development of a local marine phosphate industry is projected to create over 51 600 direct, indirect and induced jobs through growth in the mining, processing, fertiliser production, agriculture and transport sectors, as well as the expansion or creation of supporting businesses that provide various essential products and services.

“Allowing its development will create new local industries and support growth in others. Such an industry will undoubtedly be of great measure in achieving the country’s desired economic transformation and goals of economic independence and industrialisation, contributing to the improved well-being of all Namibians,” the chamber of mines concluded.