Home / Recovered Shitembi happy to be back

Recovered Shitembi happy to be back 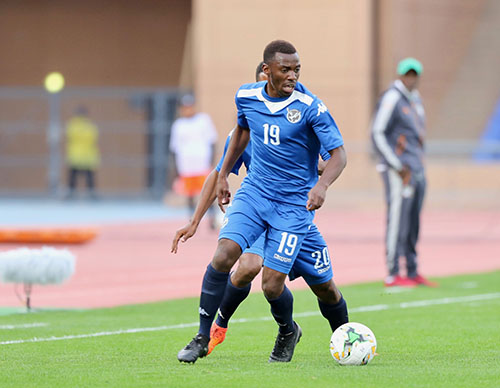 After being sidelined by an assortment of injuries for almost nine months, Namibian international and Malaysian Super League club Terengganu FC midfielder Petrus ‘Dancing Shoes’ Shitembi is excited to be up and running again.

New Era Sport caught up with the 29-year-old industrious midfielder, who shared that he recently returned to training with the rest of his teammates and is excited to be well on course towards regaining full fitness.

“It is like a massive load has been lifted off my shoulders, it really feels amazing to be back in this space again after being away for so long. It was a huge setback without a doubt; I would say it was one of the worst injuries an athlete can get. Being idle for such a long time isn’t ideal for any sportsperson. It is something that doesn’t just challenge you physically but also mentally as well. I just thank God I could withstand this challenge and be where I am today,” said a relieved Shitembi.

Now back on the training grounds working hard to polish some rough ends as far as his overall fitness is concerned, the Namibian international said his immediate objective is to return to full speed and help Terengganu gain some respectable grounds in the Malaysian Super League next season, and hopefully win some silverware along the way.

“My immediate plan at this point in time is to work much harder on my general fitness and regain my confidence again. That’s of paramount importance at this stage. With regards to my team, unfortunately, our season is ending, so I won’t be taking part in any of the remaining games. The focus, for now, is just on myself.”

He also thanked one person who played a huge role in his recovery, making it possible for him to be able to get back on the field.

“I know this is out of context but I would also like to extend a note of gratitude to my doctor, Dr Gan Eng Cheng for a successful surgery and for all he did for me throughout my process of recovery, the advice, the constant motivation, just to mention a few; my physiotherapists and trainers at my physiotherapy centre, Damansara Sports Medicine and Rehab Therapy (D’smart centre) for an impeccable service for the past nine months. Couldn’t thank them enough.”