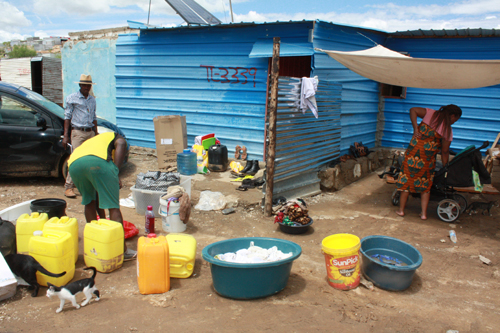 More than 120 residents in the low-lying areas of Goreangab informal settlement in Katutura have been moved to higher ground following a rise in water level due to continuous rain.

The about 127 residents started relocating to higher ground since Saturday. Samora Machel constituency councillor Nestor Kalola told New Era yesterday he had approached the City of Windhoek to help relocate residents, especially those who have settled in riverbeds and flood-prone areas to available higher ground in order to save lives.
“This was something urgent and as soon as I was informed by the residents I approached the colleagues from the City of Windhoek who acted promptly to permit the people to be shifted.

We shifted them to any open area available that is already cleared so that we save lives and properties,” he said. Kalola acknowledged his team did not consult other members of the public who are earmarked for the open land, as there was no enough time to do so.
“We did not consult people because that land still belongs to the municipality, everyone there is living illegally. However, people should help each other so that we save the lives of those who are at risk of being washed away by the heavy flow of water,” he explained.
A local community activist in the area Jeremia Haipinge said the relocation of residents to high ground was long overdue. However, he raised concern that the situation could lead to conflict, considering that no consultations took place with local residents earmarked for the available land.

“These people are all settled at the piece of land earmarked for others. They now live in fear that the owners will come deal directly with them instead of facing the City of Windhoek and the regional councillor who was part and parcel of the decision,” he added.
According to the activist, landless residents in the informal settlements need to be sensitised on the issue of land ownership, including understanding the fact that the land belongs to the city until such time they are registered after proper demarcation has taken place.
“Otherwise people will fight each other here. We have a typical example that occurred yesterday between two neighbours. They were assaulting each other verbally because the one from the north last night found the other one shifted next to her house. There were no physical fights because we intervened and the City Police were called in, however, this need to be prevented,” said Haipinge.

When New Era arrived at the scene, we found more people busy reconstructing their shacks while some were packing their belongings into their temporary shelters. One of the residents moved to higher ground, Kwedhi Tobias, praised the decision to move them, saying he has been living in a flood-prone area for the past five years.

“Luckily I was shifted to a place that I cleared. I am very happy and I want the councillor and the City of Windhoek to continue with this initiative so that everyone will sleep in peace,” he said.

Another flood victim Venancio Jonas Massango said he was in the north when the team visited the area and gave directives for them to shift.  “I hope they will also listen to us. All our two-bedrooms are flooded and most of the beddings and clothes are destroyed. We need to find a solution to make a way for water to flow smoothly and avoid these incidents,” he suggested. – ljason@nepc.com.na