Shoprite strike:  No solution in sight 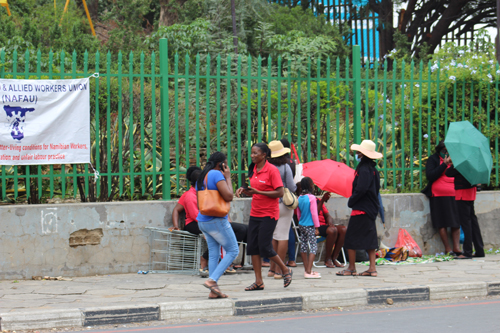 Shoprite workers yesterday continued their indefinite strike over better pay, with no immediate solution in sight since the labour impasse that started on 21 December 2020.

The employees are demanding a salary increment of N$600, a housing allowance of N$450, a transport allowance of N$500, and permanent employment for workers who have worked in the stores for over a year temporarily.
According to the workers, most employees who work on contract receive a salary of N$1 200 per month, which is not sufficient given the state the domestic economy is in.

In the petition, employees also mentioned that they work extra hours without being paid overtime and are being dismissed for simple reasons such as a shortage of N$1 from the till machines.

According to the chairperson of Economic and Social Justice Trust, Herbert Jauch, for several years, Shoprite has ignored workers’ pleas for better wages and benefits to enable them to at least meet their basic needs.
“Instead of meeting these demands which Shoprite could have easily done given the profit margins and the multimillion-dollar bonuses that the company continues to pay to its top managers, Shoprite continues with its highly exploitative and union-bashing practices,” Jauch recently outlined in a statement.

In 2014, for example, he said Shoprite went as far as granting increases only to those workers who were not members of a particular trade union. “Workers were told to resign from that union in exchange for an increase. This grossly unfair labour practice only ended when workers launched a case with the Office of the Labour Commissioner.”

Furthermore, in June 2015, workers submitted their wage proposal to the Shoprite management but were once again ignored. In light of Shoprite’s refusal to bargain at all (let alone in good faith) and angered by the company’s decision to unilaterally impose increases, Jauch stated that workers decided to go on strike in July 2015.
This led to the strike action, which started last month.

Through their trade union, Namibia Food and Allied Workers Union (Nafau), Shoprite workers demanded an entry-level salary of at least N$2 500 per month, a general salary increase of N$600 per month plus the introduction of a transport and housing allowance.
He further mentioned that employees demanded that after 12 months of employment, they should be treated as permanent workers. Jauch said Shoprite could easily have met these reasonable and modest demands.
Instead, the company offered a “mere” 5% increase which in practical terms means an increase of N$100 per month for a worker with a monthly income of N$2 000.

“The Economic and Social Justice Trust, therefore, supports the call by Shoprite workers and Nafau to boycott the stores of Shoprite and its subsidiaries to pressurize the company to negotiate in good faith and to accept the justified demands from its workers,” he said.
A shop steward, who has served Shoprite for 22 years, yesterday said: “If you see my pay slip, you will die.”
The worker who humbly requested anonymity stated she joined the company in 1999 as a casual worker, before being made permanent in 2004.   She said after 22 years, her salary is still around N$3 000.

“Imagine after all those years my salary is still around N$3 000 with no benefits. I cannot continue like this the company must come on board and give us reasonable benefits,” she said.  Meanwhile, the company claimed in a statement, in response to a petition by the striking workers, that it was paying salaries in compliance with prevailing labour legislation.

According to a Nampa report, the company stated that they have a long-standing view that all employees are entitled to reasonable and decent working conditions and they believe that they offer market-related salaries.
“Dealings with our employees are always on principles of fairness and respect and in compliance with the provision of prevailing labour legislations. We also strive to maintain amicable relations with labour unions who are sufficiently representative of our employees,” the statement reads.
-Additional reporting by Nampa
-mndjavera@nepc.com.na