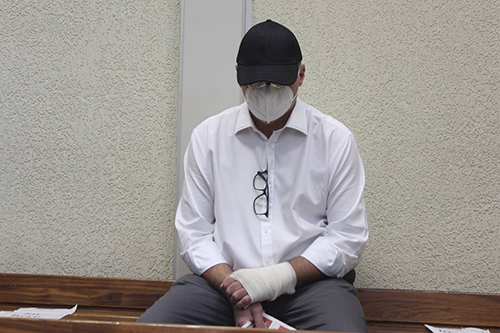 A murder accused British multi-millionaire, who claimed to have invested in excess of N$150 million in Namibia in the last 10 years, said he was willing to pay bail of N$200 000. Harvey Boulter (51) is accused of murdering one of his employees in the Kamanjab area during March this year.

He has since taken his fight to be released on bail to the High Court after he was denied bail in the Outjo Magistrate’s Court. In the High Court, the State is demanding that he at least pay N$1 million should his bail appeal be successful.

Boulter, through his lawyers Sisa Namandje and Kadhila Amoomo, said magistrate Immanuel Udjombala of the Outjo Magistrate’s Court misdirected himself in law when he denied Boulter bail on 11 May. Submitting oral arguments yesterday, Namandje said the whole judgement is strewn with irregularities.

“What emerges from his reasoning, among others, is that he made a number of mistaken findings that materially influenced his ultimate exercise of his discretion to refuse bail to the appellant,”  he argued.

He added that the court failed to take into consideration undisputed facts that are in favour of Boulter.  Namandje said Boulter has invested about N$150 million in Namibia over a 10-year period, and has had permanent resident status in the country since 2017. The accused has fully cooperated with the police during their investigations, and was the one who

called and reported the incident to the police. He has handed over his passport to the police, and has not interfered with witnesses or ongoing investigations.

Furthermore, the accused said he was saddened by the death of Gerhard van Wyk senior, as he regarded him as family. It was Namandje’s argument that no evidence
was presented during the bail hearing that Boulter would abscond, interfere with investigations and witnesses, attempt to defeat the course of justice, and how his release on bail would jeopardise the administration of justice.

“We thus pray to the court to uphold the appellant’s appeal, set aside the court a quo’s decision, and grant the appellant bail in the amount of N$200 000 with conditions attached as it may deem appropriate in accordance with justice,” pleaded Namandje.

The State, through prosecutor Taodago Gaweseb, is opposing the application, citing that Boulter failed to show on a balance of probabilities how the magistrate erred in his findings.

“The magistrate in the lower court ruled that there is a strong case, and indeed the State proved a prima facie case against the appellant,” reasoned Gaweseb.

He said the mere fact that there is the commission of a serious offence and the probability of a heavy sentence being imposed prompts the court to form an opinion that it would not be in the interest of either the public or the administration of justice to release Boulter on bail. Gaweseb submitted that should the court find there was misdirection on the part of the lower court in refusing Boulter bail, the High Court may grant bail in the amount of N$1 million with strict conditions attached.

Boulter is charged with a count of murder, possession of a firearm without a licence, illegal possession of ammunition, and attempting to defeat the course of justice. All charges are in connection with the death of his employee, Van Wyk, who succumbed following a shooting incident at his farm Kaross, situated between Kamanjab and the Etosha National Park.

It is alleged that the incident occurred after an altercation during a braai held at Boulter’s farm. During the scuffle between Boulter and Van Wyk, a shot went off. Van Wyk was shot in the abdomen. He died while being transported to a hospital.

Boulter was shot in his left hand during the incident. Judge Claudia Claasen will give a ruling in the matter on 15 July.