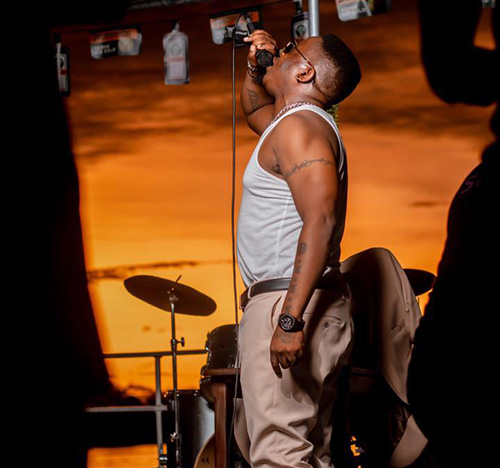 Grinding it out in the studio after almost a four-year hiatus, Sunny Boy – real name Sunday Shipushu – is ready to release his latest album ‘Kingdom of Yaziza’.

But before he drops the album, the hikwa star wants his fans’ input. Yes. Sunny Boy said he needs his fans’ help in terms of selecting the right final tracks that should make the cut on the album.

Addressing his fans through VIBEZ!, Sunnyboy said: “I need your help to do this. I need you to make sure that the ‘Kingdom of Yaziza’ comes out perfectly. I need you to tell me where to improve a bit. It does not matter that I have been so long in the industry, because you learn something new every day. This is going to be an interaction with my fans so they can give me an idea of what they expect from me. So, do come through so that we can make history together”.

The interaction with fans will take place through five listening sessions, which also gives Sunny Boy a chance to interact with his fans on a personal level.

Besides welcoming constructive criticism and advice to complete the album, the singer said getting together with his fans will provide them with a better understanding of how the project came to fruition.

“I’m the conductor and in the driving seat, but there’s always someone who can tell you to take a turn here or there to reach your destination faster without any hassles. That’s the idea to also create awareness and market
the album properly.
There’s nothing more insulting than people asking you when is your new album coming out, while you already released it and they don’t know about it.”

He further said it is heartbreaking to put your blood, sweat and tears into a project, and it is not recognised the way it should be.

“I felt it’s only fair for people to listen to it before buying the album to know what to expect. I believe if they listen to five tracks at the listening sessions, they will be convinced that the whole project is worthwhile,” he enthused.  The ‘Young, Wild and Free’ hitmaker believes in being innovative and getting his product off the ground the right way, hence his decision to host such initiatives. “You cannot follow your fellow counterparts’ lanes and plans, and decide to do the same thing. You should always do things your way, befitting to yourself, which you understand. It’s a rough industry, and we need to find new ways of selling ourselves.”

The Ongwediva-born star said he chose the album’s name because of the legacy he now commands in the industry. For him, the word kingdom resonates with power, legacy and monarchy.

“This is my safe haven because I’m in my zone where I feel powerful and untouchable, where I’m doing things at my pace.

Musically, I’m in my own race, where I ain’t chasing anybody.

I’m trying to reach a higher level of excellence, where nobody can disturb my peace of mind.”

Seventy per cent of the production credits belong to Glo. The other credit goes to Araffath, Champions League, Andre on the beat and DJ Dozza, just to mention a few.  The first listening session will be tonight at Tall Tree Bar, with performances by Ms Rou, Manxebe, Top Cheri, Ethnix and PhatBoy Lutor. The date and venue for the four other listening sessions around the country will be announced after two weeks.