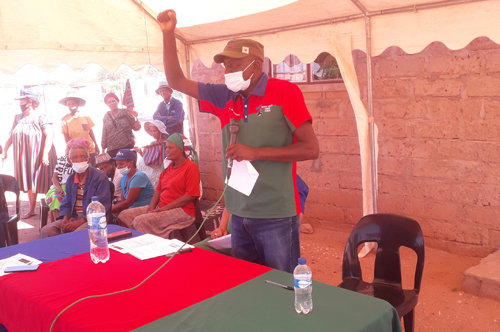 AROAB – The ruling party, Swapo, says it is fully prepared and determined to take over control of the Aroab Village Council ahead of Friday rerun election.

Swapo //Kharas coordinator Matheus Mumbala assured the party faithful during a campaign rally at Aroab on Saturday.
The politician pleaded with registered voters “not to repeat last year’s mistake” by not voting during the local authority elections slated for this coming Friday. “Please go in big numbers to vote and also spread the message in the community that Swapo is the only party who can bring about development for the betterment of all,’’ he said.

Mumbala also argued opposition parties were only talking about the Fishrot scandal, accusing them of having failed to improve the socio-economic circumstances of the less fortunate.

“They only care to send people to the National Council when winning elections and totally disregard their supporters on the ground level,’’ he added.

Mumbala further accused the Landless People’s Movement (LPM) of having failed to elect a chairperson of the //Kharas Regional Council in order to send more councillors to serve in the National Council.
“By doing so they in fact shied away from managing the regional council and thus holding further development hostage through selfishness,’’ he claimed.

Speaking at the same event, former Swapo Karasburg East constituency councillor Dennis Coetzee argued that those claiming Swapo did nothing for the past 30 years are highly mistaken.

“Swapo is in existence for nearly 60 years, fighting for 27 years for the freedom we are enjoying today,’’ he said.
He added the party, through the enactment of the Namibian constitution, brought about freedom of speech, which is the backbone of any democratic society.

“I was born and grew up in Aroab and know exactly how my fellow residents suffered during colonial times and one should give full credit to Swapo for bringing about Namibia’s independence through the blood that waters our freedom,’’ said Coetzee.
He then questioned the LPM’s promises of giving people land and old-age social grants.

“Those things never materialised as Swapo is still the government at the end of the day,’’ he said.
Coetzee also urged opposition parties to stop diminishing the image of Swapo because of the Fishrot saga.
“Those involved in it were party members as individuals, thus, to say Swapo as a political party is guilty of the Fishrot issue is rather confusing,’’ he said.

The former councillor then called on members to go out and convince people that what they heard from others is not true and will never be.
He also said opposition parties should stop promising people that they will fire people lawfully employed in government and in order to give those jobs to their supporters.

Coetzee added some members of the youth should not blame Swapo for their failures in life as there are ample opportunities like free education, but if they decide not to use such opportunities in life, they should rather blame themselves.
Voters in the southern part of the country will exercise their democratic right this Friday for a rerun, ordered by the country’s electoral court which annulled last year’s local authority elections in Aroab, Koës, Stampriet and the Mariental Rural constituency results due to irregularities.
- sklukowski@nepc.com.na