Tashia travels - Travelling in the rain 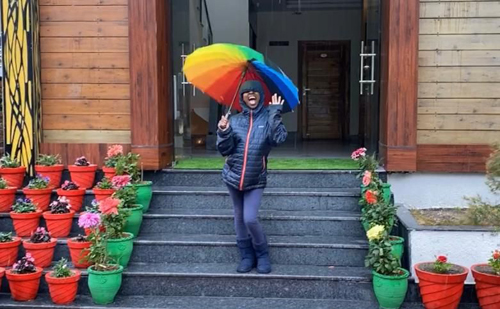 The recent downpours that have flooded some parts of the country have given the Namibian landscape a magical makeover. Deserts in particular, are meant to be dry and lifeless places, but this is not the case in Namibia. Ever. The rain, however, did enhance the beauty of the Namib desert with an explosion of colour by bringing radiant rainbows and flooding our rivers.

I’ve been rained on in India. I’ve skipped puddles in London. I’ve gotten drenched in by torrential downpour in Singapore. I’ve experienced a five-day non-stop rain shower in Bali. Some of it sucked, some of it didn’t. Some of these experiences lit my soul on fire, others left me shaking like a leaf because I get cold easily. Despite the wonders of the rain, I’m not a fan of travelling in what I consider to be “bad weather”.

Sunshine works for me. Infinity pools and sunny sandy tropical islands (all the customary Instagram bait), works for me. I don’t mind travelling to cold, gray and moody places where comfort food and fireplaces are the order of the day. But the rain? Nope. I’ve been caught in it far too often in unsuitable clothing, freezing my precious bits off in the process. One thing the recent rains have made me think of though, is the need to reshape the way I view gloomy weather when I travel.

Now, however, I find myself in a somewhat contradictory position where I’m yearning for a trip to Sossusvlei BECAUSE of the recent rainfall. So, I’ve challenged myself to offer four benefits of travelling and exploring destinations in the rain.

1: MESMERIZING VIEWS
Everything, and I mean everything, looks better when drenched in liquid sunshine. I’ve noticed that the rainy season in Namibia uplifts spirits, brings about sheer gratitude and a buzz of activity in all forms of life. Witnessing the enchanting makeover as the piercing Namib Desert sun disappears behind majestic clouds, brings the most mesmerizing views with it. Sunset, which I already believe to be nature’s most spectacular show, is my favourite part of a rainy day no matter which part of the world I find myself in.

2: PETRICOR
The distinctive earthy aroma and scent produced when rain falls on dry soil. You know, that pleasant and unique smell that only comes with the rain and we all take a collective sigh of pleasure, breathing in a little more deeply. The word comes from the Greek words ‘petra’, meaning stone, and ‘ichor’, which in Greek mythology refers to the golden fluid that flows in the veins of the immortals.
So, basically, it’s the moment the golden fluid (rain), kisses the ichor (stone/earth), the magic happens. Imagine being engulfed by that intoxicating sweet smell of Earth, in a place you are seeing for the first time? I’ve always been too bleak to notice the magic of rain, an unknown land and a familiar smell. An experience I won’t take for granted when it presents itself again.

3: SMALLER CROWDS
You can splash your way through a tourist attraction through a much smaller crowd because Mother Nature is uncooperative. Or is she? *wink wink*. The list of benefits of visiting any tourist attraction on a rainy day is rather endless, fewer people, shorter queues, smaller crowds, better service, not so noisy, and I can go on and on because ultimately, it’ll just be you and your solitude. Because of the rain. I’ve promised myself to do more of this by embracing the rain in nature, I foresee a trip to South America to tackle a small part of the Amazon Rainforest to honour that promise.

4: ROMANCE
The rainy season is deemed to be the most romantic seasons of all, BMW weather hello! For those who don’t know, BMW weather has nothing to do with the fancy German-engineered vehicles. This alludes the are far more sexy acronym: Baby Making Weather. The next part is unrelated, but boyfriend and I are travelling to the United States of America soon and we’ve decided on a trip to Seattle because it’s the most obvious rainy day destination in the U.S. It’s also a city that embraces its reputation for precipitation, it has secret street-art installations at bus stops that only appear in the rain. Now that sounds like an interesting date to go on.

I’ve decided the world is divided into three kinds of people: the ones who love rain, the ones who don’t, and the ones who love to travel in the rain. I generally find it rather irksome to travel in heavy rains but I will be embracing the fact life is all about finding beauty in the most burdensome situations. So, go out there and create memories in the rain, go with the flow (literally and figuratively), get drenched while you explore and travel - you might just find that you love travelling in the rain.