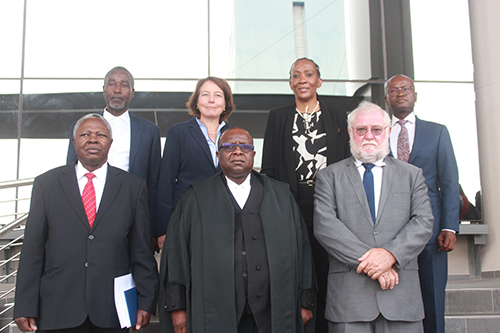 “I believe with a transparent, accountable and efficient tribunal, we can set that record straight and make sure that the land administration and land reform processes are indeed transparent. If not, it would take us steps back,” said Schlettwein, who was speaking when the group were sworn in by Judge President Petrus Damaseb. The group comprises retired Judge Alfred Siboleka (chairperson), former NamWater CEO Vaino Shivute, lawyers Laurence Kavendjii and Anne Shilengudwa, and financial and economic expert Dagmar Honsbein. They will serve for three years. The Lands Tribunal has the jurisdiction to decide any land appeal lodged, as well as consider and make decisions on applications made to it in terms of the law. The law provides that a decision made by the tribunal may be executed as if it were an order of the High Court. Schlettwein told the tribunal members that the public expects them to attend to cases and finalise them within a reasonable time, and to decide on the matters without fear or favour.  “I look forward to good cooperation with the Lands Tribunal, but this cooperation must be strictly in the best interest of the Namibian nation,” he noted.

Schlettwein added that the amount of work will increase once the Land Bill is enacted into law, as matters of communal land will be referred to this
body.