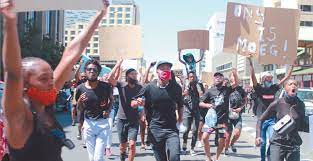 About 45% of men and 40% of women aged 18 to 24 years experienced physical, sexual or emotional violence during childhood, gender equality minister Doreen Sioka has said.

Sioka, who was addressing the inter-ministerial dialogue to end violence against children in Namibia on Wednesday, said these figures were revealed in a survey report conducted by her ministry to develop evidence-based responses and policies in 2019.

Nearly two out of five Namibians have experienced violence.

In addition, data in the survey also revealed that the most common location of the first incident of sexual violence in childhood is the school and home.

“The most common perpetrators of the first incident of sexual violence in childhood are intimate partners (30%), family members (20%), and others,” indicated the minister.

The survey was intended to build Namibia’s capacity to design and implement violence prevention programmes, and build and enhance successful child protection systems following the Child Care and Protection Act, No 3 of 2015.

Sioka added that Cabinet approved that Namibia joins the global alliance on ending violence against children.

“This alliance uses the concept of path finding to connect and convene partners to raise awareness on violence against children, catalyse leadership commitments, mobilise new resources in countries
and promote evidence-based solutions and innovation. It is also used to support those working to end all forms of violence, abuse and neglect of children,” she explained.

Meanwhile, Dr Joan Nyanyuki, the executive director of the African Child Policy Forum, commended the government of Namibia for joining the pathfinding initiative of the Global Partnership to End Violence against Children.

Namibia is now among the 31 countries in the world and the ninth in Africa that has made commitments to invest in ending violence against children through legislative, policy and programmatic frameworks.

“Not only have you ensured that children are legally protected from violence, but you have also set up structures and mechanisms to enforce these laws,” she said.

One of the laws that are set up by the government to strengthen efforts to protect, promote and fulfil the rights of children is the Child Care and Protection Act. In addition, the government has set up the Inter-Ministerial Committee known as the Permanent Task Force, the National Violence Against Children Survey, and the appointment of the executive director of the Ministry of Gender Equality, Poverty Eradication and Social Welfare as the focal person.