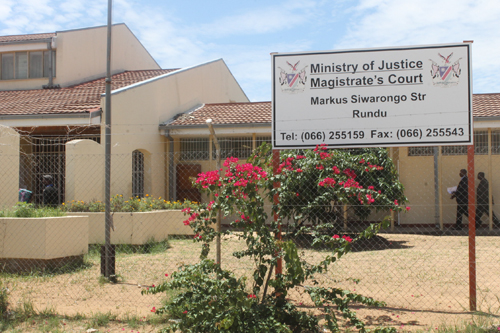 RUNDU – A 20-year-old unlicensed driver, who allegedly drove over and killed a 92-year-old pensioner last week while was trying to cross the Trans-Caprivi Highway at Rundu, has been denied bail. Russu Victor has been charged with culpable homicide for the sudden death of Kalive Leya, a resident of Ndama location.

The accused was driving a Nissan Note with registration N10219RU and was travelling from east to the western direction of the highway and allegedly bumped the pensioner who was crossing the road and died instantly.
The motorist was reportedly not in possession of a valid driver’s licence. Victor appeared in the Rundu Magistrate’s Court on Monday before assistant magistrate Rufinus Jikerwa. Public prosecutor, Variety Matamata represented the State in the matter.
Victor’s case was postponed to 17 February for further police investigations.