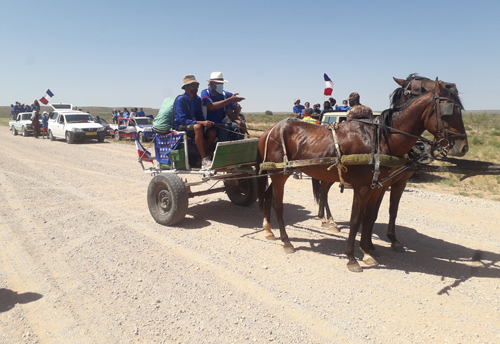 AROAB - Popular Democratic Movement (PDM) president McHenry Venaani said Aroab village today boasts with 90% of its residents having access to ablution facilities and potable water thanks to the coalition between his party and the Landless People’s Movement (LPM), which has the majority seats on the local authority.

According to Venaani, Aroab was the only local authority with less than 50 shacks and should be regarded as a model town in Namibia.
“These statistics proves that where the Popular Democratic Movement rules, prosperity accompanies it,’’ said Venaani who was addressing a rally at Aroab on Saturday ahead of Friday’s rerun elections. Venaani advised potential voters to disregard ethnicity when choosing political leaders.

“Do not say Venaani is a Herero and cannot lead a non-Herero society, rather concentrate on a basis of socio-economic prosperity,’’ he added.
He also said people should move away from the evils of ethnicity, tribalism and nepotism and rather join hands to make Namibia prosper further. Venaani said PDM has proven that it can fulfil its promises made to the electorate.

“Seen in the light of the challenge to access health services I will donate a clinic to the south in due course,’’ he said. The politician furthermore called on government to create more employment opportunities for job seekers.

“Why not let all school children wear Namibian manufactured veldskoene rather than keep on importing the traditional black school shoes from South Africa?” Venaani wanted to know.
He added that this can bring about employment and the necessary financial infusion the country urgently needs, especially in light of the current economic circumstances.

“Coming from a family where I lost my sister as a result of Covid-19 and furthermore also suffering from the coronavirus previously, it worries me deeply that people persist on defying health protocols aimed at curbing further spread of the pandemic,” he said.

Venaani also admitted that there are however also challenges within Aroab and the country as a whole.
“The cumbersome procurement process and policy in government sometimes has the effect that everything is done in Windhoek, not necessarily benefiting all Namibians, why not decentralise these services down to ground level,’’ he said.
Another challenge he mentioned is the proximity of borders to Koës and Aroab. “This is causing the illegal smuggling of drugs and alcohol which is a social evil affecting a lot of people,’’ he added.

As part of the solution to substance abuse in the region, he strongly recommended the establishment of a rehabilitation centre as a matter of urgency.

In terms of Koës where the Swapo party councillors are in majority on the village council, the PDM leader said they have strategies in place to work around the situation and turn the tables.