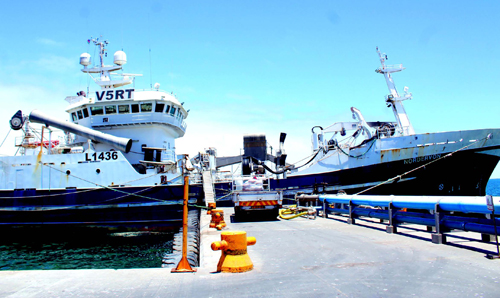 WALVIS BAY - Some players in the horse mackerel sector are finding themselves in a predicament that could result in further job losses due to the unavailability of wet quota.

According to the industry, all new quota holders allocated quotas to exploit horse mackerel for land-based processing are either selling their quotas at an unaffordable rate or are waiting to have it converted to freezer, which could be catastrophic for the sector.
A freezer quota is when the fish caught by vessels is exported without processing while a wet quota is when the catch is processed on land at a processing plant in the country, thus creating or sustaining jobs.

Namibia currently has three horse mackerel processing factories namely Seaflower Pelagic Processing, Gendev and Tunacor that are all operating at Walvis Bay and employing 1 600 people in total, while a total of nine vessels are operating in the freezer sector. Chairperson of the Wet Landed Horse Mackerel Association Jason  Angala revealed their predicament in a  letter seen by New Era, in which he stated no wet quota were also allocated to joint ventures by the fisheries ministry last year.

As a result, Angala said, wet quota factories were not operational for several months in 2020 due to a silent promise that wet quotas allocated would be converted to freezer.  “The freezer quota was exclusively issued to newcomers and the minimum set price was unaffordable for the industry. Also, all new quota holders are not willing to sell their wet allocations as they apparently had a silent promise that it will be converted to freezer after the end of March 2021,” Angala said in a letter addressed to the association members.

According to Angala, the wet landed sector is of utmost importance to achieve the fifth national development goals (NDP5) goals, especially relating to onshore job creation.

This is compared to the freezer sector that generates about 400 jobs on vessels, of which most jobs are occupied by foreign nationals.  “We have been engaging with the ministry since early 2019 for relief measures for the wet fish sector. We have informed the ministry that we suffer great losses as a result, which makes it almost impossible to sustain all year-round employment unless solutions are found,” Angala explained.
He added that the wet landed sector is in its infant stage but similarly to the hake sector believes that with the commitment the industry can ultimately achieve 70% wet and 30% freezer quota to secure and create more jobs on land.

Gendev Fishing group general manager Peter Strydom on Wednesday said his company received a wet quota of 10 900 metric tons for this year that would roughly last them about six months if the catches are good.

“We currently have one vessel in the water while last year was very bad as we could not catch for about six months. We are first catching our current allocation and will afterwards contact new quota holders to see if we can come to an agreement,” Strydom said.
He added that the conversion of wet quota to freezer is strongly opposed by the industry, as it clearly contradicts the NDP5 goals of having at least 70% wet and 30% freezer.

Kawana responds
Approached for comment, fisheries minister Albert Kawana told New Era that he is aware of the concerns highlighted by the sector. “Let me explain, Namibia plans to maximize benefits of the fishing industry as outlined in NDP5.

I have also made it categorically clear that the requirements of NDP5 must be complied with by the industry as the requirement demands that the split in respect of hake should be 70% wet and 30% freezer. This sub-sector is the backbone of the industry as it is the largest employer with operations both onshore and offshore,” Kawana explained.

According to Kawana, the split between wet and freezer in terms of horse mackerel has been reversed.  “Meaning for horse mackerel, freezer should be 70% and wet 30%.  However, this was not the case when we issued new fishing rights last year as we did not have time to do the process due to the closing of the season.  Therefore, we gave them more freezer quota with the intention that the wet lost will be compensated during the new fishing season,” he said.

Kawana added that it was for this reason that the ratio for the current season allocation was kept at 60% freezer and 40% wet. “I have so far declined applications to convert from wet to freezer, but I am approving all applications from freezer to wet. This policy is to adopt a bias towards wet over time,” he said.
– edeklerk@nepc.com.na