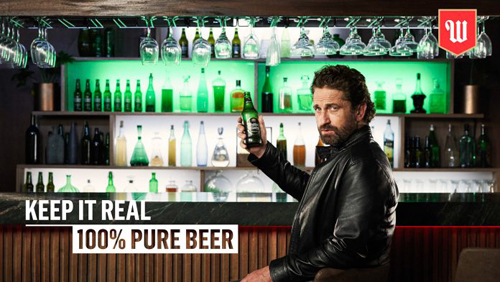 Parent company of Namibia Breweries Ohlthaver and List (O&L) yesterday said the message of their Windhoek beer advertisement banned in South Africa is simply that Windhoek beer is 100% pure beer and does not need lime to compliment it.

The comment comes after South Africa’s Advertising Regulatory Board (ARB) banned the advertisement, featuring international actor Gerard Butler, on the basis that it entrenches toxic masculinity in suggesting “real men drink real beer”.
“We are saddened by the knowledge that our advert was negatively received. We don’t like to hear that our consumers find our content irresponsible or offensive,” read a statement from O&L spokesperson Roux-ché Locke.

According to the ARB, the advert, in which they describe Butler as “a macho-looking movie star”, makes a character asking for lime, a target for teasing in a toxic environment. The interaction between Gerard and the character, the ARB, ruled, sends an unavoidable message that is not acceptable in advertising, especially because it does not actually come out and say that real men drink real beer.

“The reality is that it is exactly the unspoken nature of the communication that makes it particularly dangerous – the gender stereotype portrayed as so normal that it does not even require explanation,” said the ARB, who took issue with both “the entrenchment of the role of men as having to behave in a certain way” and “the entrenchment of male behaviour that is bullying, and what has come to be labelled as ‘toxic masculinity’.”

The decision cites a clause in the ARB’s code of advertising practice that bans “gender stereotyping or negative gender portrayal” unless it is “reasonable and justifiable in an open and democratic society based on human dignity, equality and freedom”. The South African licensed brewer of Windhoek beer, Heineken, argued the character ordered lime out of habit, “and when he tasted the Windhoek Lager without the lime, his response was one of appreciation. He does not react with offense or shame”.