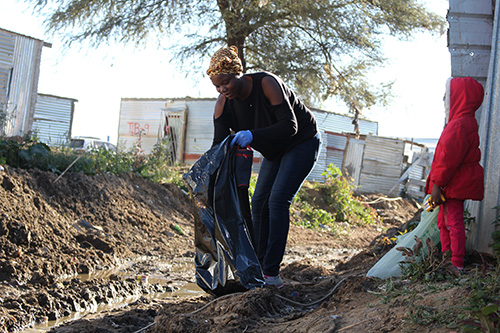 The head of the EU Delegation to Namibia, Sinikka Antila, urged the City of Windhoek to utilise the means available under the solid waste management project to bring Windhoek back to its cleanest city in Africa position.

Antila was speaking during the virtual signing ceremony between Bremen, Germany and the City of Windhoek on an EU-funded solid waste management project on Monday.

She said although Windhoek still featured among the 10 cleanest cities in Africa, it scored fifth place after Kigali, Port Louis, Cape Town and Tunis. “Let it be our mutual ambition, and utilise the means available under this new project - roughly 2.2 million euro (N$36.8 million) – to bring it where it was some years ago! In the first place, let us jointly set the path for a cleaner, healthier and more sustainable Windhoek,” she stated.

Antila said the project will support resources efficiency and create much-needed employment opportunities at various stages as it directly addresses some of the most pressing needs of the population in the capital.

“As we are all very well aware, the population of the City of Windhoek has been rapidly increasing in the last decade due to urbanisation and increased economic activity. This has led to unprecedented pressure: the upsurge in the generation of solid waste across the capital is creating environmental, health and increasingly also “aesthetic” challenges,” she observed.

The funded project was done in line with the EU’s sector policy objectives and the Sustainable Development Goals (SDGs).

“We understand that the provision of high-quality solid waste management is crucial to safeguard public health and the protection of the environment. Furthermore, the transition to a circular economy will reduce pressure on natural resources and create sustainable and inclusive growth. It is also a prerequisite to achieve the 2050 climate neutrality target and to stop biodiversity loss.

“I am convinced that you will turn this ambitious programme into a big success. And I am confident that the solid waste project will also create valuable synergies with other EU-funded programmes, for example in the area of water, sanitation and hygiene in informal settlements, and the areas of economic development and inclusive and sustainable urban development, funded by Germany,” Antila emphasised.

Speaking at the same occasion was City of Windhoek mayor Sade Gawanas, who said the project supports the 2018 National Waste Management Strategy, which aims to make Namibia a leading country in Africa in terms of standards of solid waste management by 2028.

“At the municipal level, the project supports the City of Windhoek’s Integrated Waste Management Plan, which envisions achieving total waste reduction or zero waste within our city,” she noted.

She thus urged Windhoek residents to play a role in reclaiming the cleanest city position in Africa.

“To the residents of Windhoek, we should strengthen our programmes around our motto ‘my waste, my responsibility’, involving broader consultations with stakeholders, for our city to reclaim its title as one of the cleanest cities in Africa and beyond. We should thus resuscitate our school-based solid waste management programmes, which had been affectionally known as ‘catch them young’. This is because children are a key catalyst of nation-building, behavioural change, traditions and cultural growth,” Gawanas said.