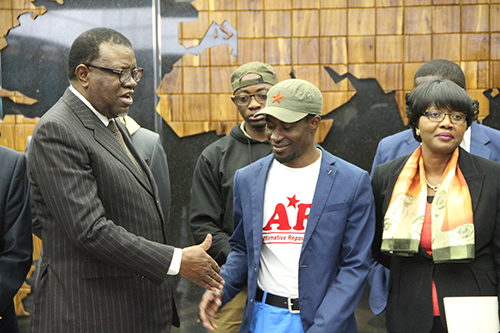 The Affirmative Repositioning movement’s suit against government’s failure to service and deliver 200 000 plots in urban areas countrywide is on hold as the court waits for the Supreme Court to pronounce itself on the exception appeal.

On Tuesday, High Court Judge Orben Sibeya postponed the matter to 7 July for the Supreme Court to decide on the exception application appeal filed by lawyers representing government and President Hage Geingob.

This follows after the parties in their joint status report, indicated that the Supreme Court is yet to allocate a hearing date for the appeal.

On 17 September 2021, the government and the President, represented by Neli Tjahikika and Dennis Khama, in an unopposed application, were granted leave to appeal to the Supreme Court against the High Court’s decision to dismiss their exemption application.

Thus, the High Court failed to exercise its discretion when it found government and the President failed to convince the court that the terms of the agreement between the government, President and AR did constitute political statements and, therefore, not an agreement.

In September 2020, the group sued government and the President after they breached their terms of agreement and failed to deliver 200 000 serviced plots in urban areas countrywide within a period of five years.

As part of the said agreement, AR will not continue with its radical campaign to occupy vacant land in urban areas. The agreement was reached on 24 July 2015.

So far, according to court documents, government has only serviced 15 000 plots.