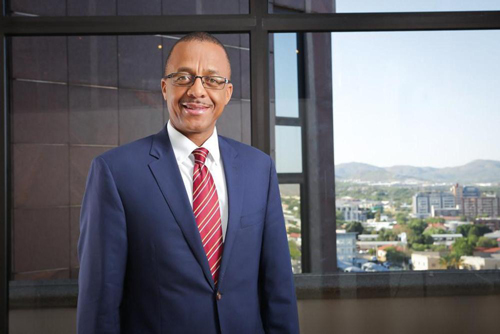 Over the past year, digital payment instruments such as electronic wallet payments and funds transfers have increased substantially in volume and value. This is according to the Bank of Namibia deputy governor Ebson Uanguta, who last week launched the National Payment System’s (NPS) vision and strategy for the next four years.

For the previous vision’s five-year period, covering 2016-2020, the year 2020 stands out in dramatic contrast to the preceding years. With the global Covid-19 pandemic, 2020 certainly had a significant and widespread effect on both domestic and global payments.

“The pandemic’s striking and lasting impact accelerated the pace of change – and as our lives and global economies become more digital, so have our payments. We are witnessing this in the dramatic shift in payments behaviour of domestic payment system users,” said Uanguta.
Uanguta further stated there is a new flagship project, named NamPay, by the banking industry, which is set to be fully functional by June 2021.
NamPay is a new domestic electronic fund transfer (EFT) system, introduced by the Namibian payments industry in collaboration with the Payments Association of Namibia (PAN) and payment service providers to enhance the efficiency of EFT transactions in Namibia across the debit and credit payment streams.

He noted the revolutionary NamPay system brings about major enhancements to how EFT transactions are conducted in Namibia.
“NamPay will replace the existing EFT system with a system that uses an internationally recognised messaging standard, ISO 20022. A system based on such a standard is harmonious and can be enhanced with emerging and future technologies on a global scale, thus making NamPay scalable for future development,” he revealed.

Talking on vision 2025, Uanguta said the new vision is set to position the industry as a world-class national payment system at the forefront of digital innovation and transformation – and amongst other strategies and initiatives, it aims to drive the country towards a cash-lite society, given the proliferation of efficient and affordable digital payments.

In the previous strategic vision, there was growth witnessed in the NPS through the access and participation of new players such as banks, non-banks and payment service providers, further advancing competition and altering the payments landscape.
Other key strategic milestones achieved in the past five-year period include the successful phasing out of cheques as payment in Namibia, the issuance of the position paper on interoperability in the NPS, the establishment of the PAN Electronic Money (e-money) forum to enhance the inclusiveness and access of both bank and non-bank e-money issuers to the NPS as well as to enhance interoperability in the NPS.
Uanguta said NPS is paramount in supporting Namibia’s economic growth and development.

“The modernisation of such an ecosystem is an ongoing process and we continue to witness rapid accelerations in fundamental reforms in national payment systems worldwide – and Namibia is no exception.”
Since the establishment of the NPS vision and strategy in 2000, it has become a tradition to craft a new vision and strategies to guide the NPS after every five years.
- mndjavera@nepc.com.na