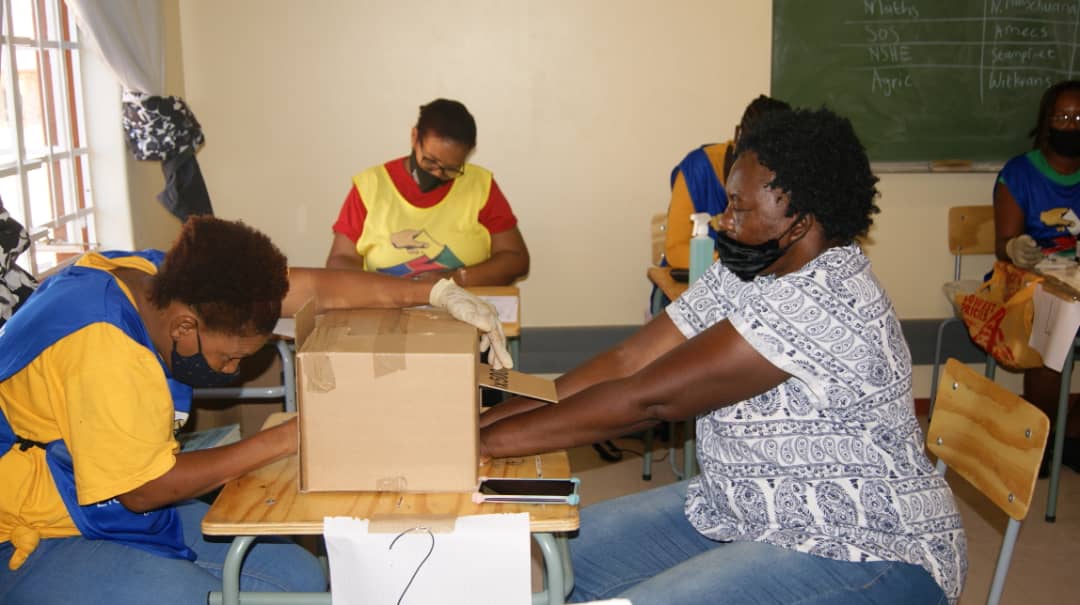 KEETMANSHOOP – The Landless People’s Movement (LPM) emerged as the biggest winner in Friday’s poll rerun after securing the majority seats on the Stampriet and Koës local authorities, while the party also snatched the Mariental Rural constituency away from Swapo.

The party could still be in the pound seats at Aroab where it managed to get two seats along with the ruling Swapo, while the Popular Democratic Movement (PDM) secured the remaining seat.

LPM is likely to enter into a coalition with PDM to maintain its grip on power on the five-seat village council. “LPM is a political party serving all the people in Namibia through the people,’’ said Gibson Christiaan, grassroots commissar for the party in the //Kharas region.

At Aroab, LPM received 293 votes – enough to secure two seats – while Swapo came second with 236 votes. This number was also enough for the ruling party to secure two seats, while PDM came in third place with 132 votes to take the remaining seat. The Namibia Economic Freedom Fighters (NEFF) ended at the wrong end of the table with only 12 votes.

In the Koës local authority election, LPM secured three seats after obtaining 376 votes, while Swapo got the other two seats, 274 votes. The PDM came in third place with 57 votes, while the Independent Patriots for Change (IPC) garnered a measly 30 votes.

With 353 votes, the LPM was the party of choice at Stampriet, scooping three seats in the process, while Swapo settled for second place with two seats from 272 votes.

The PDM came third once more with only 70 votes to its name. The elections were, however, marred by a poor voter turnout.

“I also personally observed that the youth did not turn up in numbers this time around, but we are anyway happy for our supporters who voted to bring about the needed change,’’ said Christiaan.

LPM’s Hardap commissar Willy Hochtritt regarded the party’s victory in the region as a major success and a step in the right direction. “Our people were tired of empty promises by other political parties prior to elections and now opened their eyes and voted for change,’’ he said.

“We did not make any promises to the electorate during our political campaigns as LPM will look after all Namibians where it’s  in power.” In the Mariental Rural vote, LPM’s Deensia Swartbooi received 1 099 votes compared to Swapo’s Simon Kooper (854), PDM’s Stefanus Bloodstaan (97) and independent candidate Desmond Tjipanga (46). Approached for comment, Swapo //Kharas coordinator Matheus Mumbala ascribed the defeat at Koës local authority to a lack of voting culture among the electorate in the village.

“People are exercising ‘swing voting’ whereby they vote for party A today and party B tomorrow,’’ he said. Mumbala said his party will improve with the next elections and will not approach other parties to form a coalition at Aroab.  Elizabeth Karrigus, Swapo party Hardap regional coordinator regarded the election process in the region as democratic, free and fair.

“People have the right to choose leaders of their preference and we, as Swapo will always respect that,’’ she continued. The party leader added despite the outcome of the just completed elections in Hardap, Swapo was still a force to be reckoned with in the region. PDM secretary general Manuel Ngaringombe meanwhile claimed it was a well-known fact that politics in the south are more about tribalism when people vote. “This tendency is however very dangerous and can have negative effects at the end of the day,’’ he said, adding PDM will always be there to serve Namibians irrespective of tribe and race.

“People should start to see Namibia as one country, one nation and stop being tribalistic in some parts of the country,’’ said Ngaringombe.

He also said his party was ready to work with any party. During the 2015 local authority elections, Swapo won four out of the five seats at Stampriet, with the PDM taking the other seat.

At Aroab, Swapo won two seats during 2015, while the PDM had also secured two seats, with the Rally for Democracy and Progress (RDP) winning the remaining seat. The RDP did not contest the latest election. Swapo has also been the dominant party over the years at Koës. In 2015, the ruling party gained three seats, while PDM got two seats.