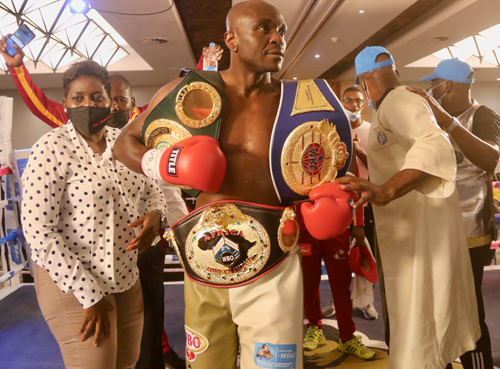 Ndafoluma took on Tcheta in the main fight of the “The Demolisher’s Time” Boxing Bonanza, staged by MTC Salute Boxing Academy at the Windhoek Country Club on Saturday, and saw the Namibian make easy work of the Malawian.

In a post-fight interview, an elated Ndafoluma said he worked hard for this fight and is happy to be crowned the new WBO Africa middleweight champion.

“Credit should be given to my coaches who made this fight look easy. I was just too good for my opponent; that is why I knocked him out in the first round,” said Ndafoluma, who added he was celebrating two decades of being a boxer from amateur level to now being a professional, and winning the title is a cherry on top of his achievements.

In the main supporting bout, boxer Nathaniel ‘Natty’ Kakololo also lived up to his words when he successfully defended his African Boxing Union (ABU) featherweight title with an eighth-round stoppage of Zimbabwean opponent Tinashe Mwadzinawana.

In the super featherweight category, Lazarus Namalambo beat Dominicus Weuyulu, while Benhard Benhard beat Ndangi Shapwa in the welterweight category. Immanuel Joseph defeated Salatiel Moses in a six-rounder super flyweight bout with a round one knockout and Alfeus Shikongo won on a unanimous decision against Charles Misanjo after eight rounds of boxing in their super middleweight bout.

In the super lightweight category, Nestor Amukotoh beat Andreas Nghinaunye with a first-round stoppage while in the flyweight division Jonas Erastus showed determination as he beat Thomas Gabriel on points despite his opponent having better height than him.

Promoter Kiriat Kamanya of the MTC Salute Boxing Academy expressed satisfaction with the quality displayed by his boxers and said he will be going back to the drawing board to try and secure more title fights for his boxers.

“I am excited about the win, my boxers did well – and this is only the beginning of more good things to come. It was a great win for him [Ndafoluma] and the academy at large; I will soon be speaking to the WBO to see what other fights we can secure for our boxers,” said Kamanya.