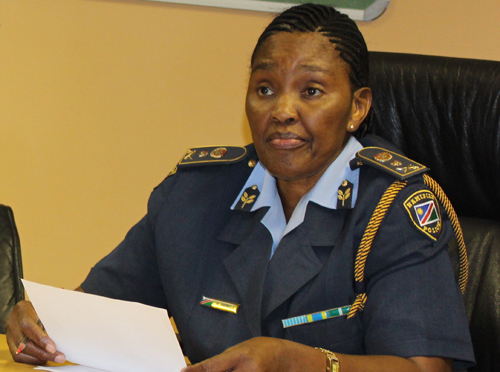 ONGWEDIVA – The Oshana region has seen a reduction in criminal activity since the introduction of the curfew in December last year, regional commander Commissioner Rauha Amwele has said.
Amwele said the region has not recorded serious cases in the last few weeks, saying housebreaking cases that were prevalent during the last months of the year have also reduced.

“At the moment, the cases have reduced; we are only reporting cases of distortion and housebreaking; however, it has also significantly reduced,” said Amwele.

In addition to the curfew, Amwele said the police have also enhanced its patrol – both by foot and motor vehicles in the region.
She said there is currently minimal movement during the curfew; as a result, there is less crime.
“We are visible everywhere, including the villages,” said Amwele.
The only challenges the police is still facing in the region are a few business owners who are still reluctant to adhere to the closure time as prescribed, especially during public holidays and Sundays, Amweele said.

Equally, the police said they have also witnessed the public working closely with the police and the community, ensuring they have left people to look after their places in their absence.
Amwele appealed to the public to continue working closely with the police to maintain the status quo.
She further appealed to the public to adhere to the regulations in place to fight the Covid-19 pandemic.
In the same vein, the regional commander cautioned business owners to ensure they are masked up all the time and that their clients also wear masks.

To the transport sector, the regional commander appealed to the bus and taxi drivers to ensure they and their customers are safe at all times.
“My appeal is that they should always wear masks and ensure that their customers also wear masks. They should also consistently sanitise their vehicles, including the door handles, at all times,” appealed Amwele.
- nashipala@nepc.com.na