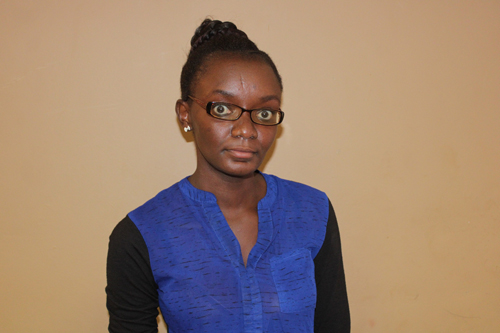 TSUMEB – At the ripe age of 25, Anmire Garises has surprised all and sundry to prevail as the deputy mayor of Tsumeb following last year’s local authority elections.

Garises, who is serving on the municipal council on the Popular Democratic Movement (PDM)’s ticket, said she is equally surprised by her sudden rise to the top, considering she only started taking politics seriously in 2019.

“The year 2019 was my first debut into the political arena, how I got entrusted and moved so quickly in the ranks and file, I don’t know, but I strongly believe it is because of the ability and vision I possess,” said Garises who is also the PDM youth wing leader for Tsumeb.
Garises is the only PDM member under the Tsumeb council. She was elected deputy mayor in December during the swearing in of new local authority office bearers.

“My mission is to empower the youth to do more with their lives, by giving practical advises and opportunities that can uplift their living standards.

As a councillor, I am here representing the interest of the youth first, and that of the entire community,” she added.
In addition, she said, she will soon start engaging business fraternity to provide job opportunities to unemployed locals before considering those from outside. “Other projects will be the provision of a police station at Kuvukiland which is a crime hotspot.
I want flushing toilets to be constructed in Kuvukiland and water provision on each household to avoid people using the bush whenever nature calls.

Furthermore, I will advocate for a mobile Nampost pay point in the area to help our elderly people who queue up for many hours at the main branch,” stressed the deputy mayor.
In terms of land delivery, Garises said, she will aggressively promote PDM’s ‘One Namibia, One Plot’ policy whereby she aspires to see 2 000 plots allocated to residents at the end of her five-year tenure as a councillor.
-osimasiku@nepc.com.na