Banks should serve all Namibians - Geingob 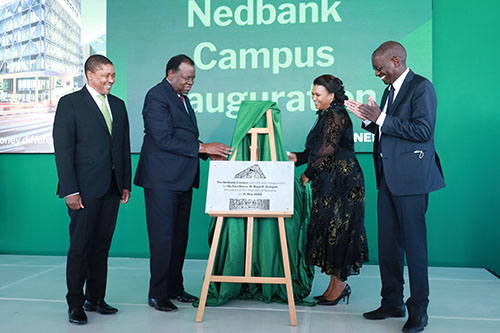 He made these remarks yesterday at the inauguration of the Nedbank campus in the capital.

He added financial institutions should show greater commitment to serving the entire spectrum of Namibia’s population by offering a variety of financial products and solutions suitable to all.

Geingob said since Namibia’s independence, Windhoek’s city centre has undergone a remarkable transformation, “and if buildings could speak, they would tell the story of a country that over the years continues to grow from strength to strength. It is a country that has embarked on a development journey that has made it one of the gems on the African continent and investment friendly for business. That is what our CBD represents – a story of growth and progress.”

“We must be aware that maintaining the peace and stability that we have enjoyed for more than three decades is highly dependent on the economic wellbeing of all our citizens – not just a privileged few. Thus, we should all work hand in hand to ensure that we promote equitable economic empowerment, ranging from the small and medium enterprises to large scale corporate organisations,” stated the President.

The banking sector plays an important role in the modern economy, namely through financial intermediation, collecting savings and lending them out to businesses, among others.

President said: “The banking sector engages in the practice of mobilising resources from surplus generating sectors and directing them to sectors responsible for bringing about economic growth”.

Geingob described the new building as an impressive addition to the ever-changing city centre in the form of the new Nedbank Campus, “the latest display of modern architecture to grace the capital”.

He encouraged other institutions to follow suit and make Windhoek a hub for innovative and environmentally friendly architecture.

At a well-represented event of cabinet ministers and members of parliament, among others, Geingob said Namibia is an environmentally conscious country.

He said Namibia is one of the first countries to enshrine the protection of the environment into its constitution.

“It is pleasing to take note that Nedbank Namibia is placing great importance towards ensuring that the Namibian banking sector plays a vital role in accelerating the local market’s transition towards a lower carbon energy future,” he explained.

The new building is constructed at Freedom Plaza in the heart of Windhoek’s central business district to the tune of N$495 million.

At the same occasion, Nedbank Namibia managing director Martha Murorua expressed gratitude to the government and the city of Windhoek for their continuous support.

Murorua remained confident that through collaboration and common understanding, the bank will continue to make a difference to pave way for greater socio-economic opportunity.

“We understand the difficult times the nation and our leaders are going through. It is tough times that need critical intervention to help consumers who are going through price hikes and also help government with economic recovery,” she stated.

She added the green building will help Nedbank enhance its services with better governance and control, and also achieve financial inclusion in Namibia.

In the past, Nedbank employees were scattered in six buildings in Windhoek alone, which, according to her, was not an easy task to manage.

Speaking at the occasion, Terence Sibiya, Nedbank Africa region managing executive said the global economy is going through challenges, such as inequality and climate change.

He assured Nedbank is at the forefront of fighting for a lower carbon energy future.