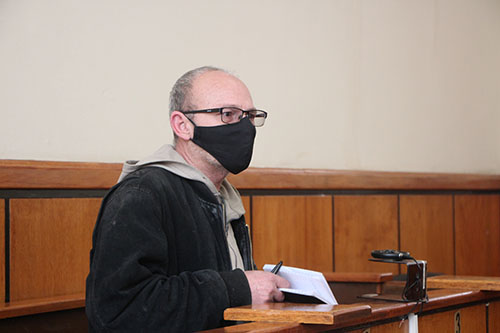 Johann Maree (50), a former police reservist accused of sexually abusing underage boys, filming and selling pornographic materials of them on the dark web, will remain behind bars after his bail appeal was dismissed by the High Court yesterday.

Judge Dinah Usiku in an order concurred by Judge Kobus Miller dismissed Maree’s bail appeal application, indicating the reasons for the order will be provided at a later stage. In March, Maree appealed the decision of the lower court to refuse him bail, citing Windhoek magistrate Celma Amadhila misdirected herself.

In his appeal, Maree claimed Amadhila pre-judged his case by concluding there is a likelihood of the State proving the allegations levelled against him and that he would abscond if released on bail before his case is finalised. Furthermore, she attached more weight to the evidence of the investigating officer, which he fervently challenged and disputed.

Amadhila denied Maree bail indicating there is a real possibility that he would abscond and interfere with the investigation of his case and with witnesses in the matter if released on bail. It would also not be in the interest of the public for him to be granted bail, she said.

Also, the magistrate argued, there is a real likelihood that the State would be able to prove its case against him, and if he were to be convicted, a lengthy period of imprisonment as a sentence is probable.

Maree is expected to go on trial in July, on 75 criminal charges. Of those charges, the State is alleging he sexually abused and exploited 15 teenage boys. He is also accused of raping or indecently assaulting 13 boys. The prosecution further claims he used 10 of the boys in making child pornography that he sold on the dark web. Maree, who worked as a private investigator and sports photographer, was allegedly operating a website under the name ‘Boy Idols’. Through police investigations, it was discovered that Maree sold pictures of boys modelling clothes and swimwear.

According to the police, videos obtained through investigations show minors performing various sexual acts in bathrooms. Other videos were filmed in toilets and swimming pools at sporting events in Windhoek. Such videos were also allegedly sold on the internet.

Maree has denied the allegations. However, the police have a confession from him in which he admits to all the allegations.He has disputed the confession, testifying during his bail application that he made the confession under duress. He further said the police made a deal with him that should he confess to some of the allegations, they would allow him to see his dogs.The accused was apparently promised that he would be released on bail. He said the police told him what to write in his confession.Maree said he agreed to the “deal” as he did not want the children to be subjected to cross-examination in court as he regards them as family.

He said the police are yet to fulfil their end of the deal as he has not seen his dogs since his arrest on 30 April 2020.

For his appeal, Maree is represented by Eva Maria Nangolo-Philemon while prosecutor Felistas Shikerete-Vendura represented the State.