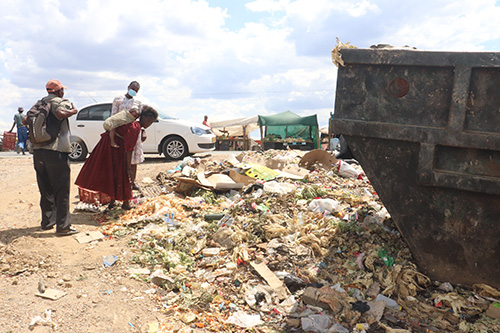 Street vendors operating at the Havana four-way stop have been accused of rendering the area hazardous. This is because they are disposing of waste irresponsibly.

Most of the waste dumped at that site are boxes, plastics, rotten vegetables and fruits and water from cooked meat sold by the vendors. A Havana resident Feresia Iilonga who owns a bar, told New Era that the situation became unbearable when the vendors started pouring dirty water on top of the waste next to the skip bin.

“As you can see, flies are all over here in my bar. This situation can affect my customers and this is where I get income to support my son who is studying at Namibia University of Science and Technology (NUST). Now I have to spend the little I get to buy insecticide for flies,” she said.

She also claimed her younger sister who lives with them has a breathing problem that started due to the horrible smell from the area.

“It is getting worse every day. I also had two extra shacks that I was renting out to generate income but the tenants moved out due to the condition. We are suffering. We need help,” she said.

Other residents, who prefer to speak on condition of anonymity, said those who are responsible for the problem do not reside around the four-way stop but come only for business.

City of Windhoek councillor Fransina Kahungu said there is a need to continuously educate residents on the importance of keeping their surroundings clean.

Kahungu was speaking in Havana last Friday after receiving a complaint about the waste situation from a resident whose businesses are being affected by the situation.

“The situation is hazardous to those who are living next to the dumping site created by the vendors who do not want to put waste in the skip container meant to dispose of waste.

Imagine the municipality has done the best they could to provide the skip container but people are dumping the waste next to it instead of dumping inside it,” she explained.

She said vendors need to be educated on how to make use of the skip container.

“They need to be educated on how to make use of black bags that will be provided by the ward supervisor for waste collection and dump it in the skip container,” she suggested.

She further registered her disappointment in the vendors for pouring dirty water from meat sold at the four-way stop market on top of the waste.

“You see, the dirty water is now mixed with the waste, the situation that attracts flies that ruin other people’s fresh products that are not part of the chaos,” she said.

She noted that there a woman reported a medical condition alleged to be caused by the hazardous situation.

Meanwhile, Juline Booys and her husband Erwin Uirab, who stay in the Goreangab location travel every day to the dumping site to forage for food.

“When these people dump food here, they are saving us from sleeping on empty stomachs. If they stop, we will go for days without food. Although the food is rotten and not fit for consumption, we clean it and consume nothing will happen to us,” said Uirab.