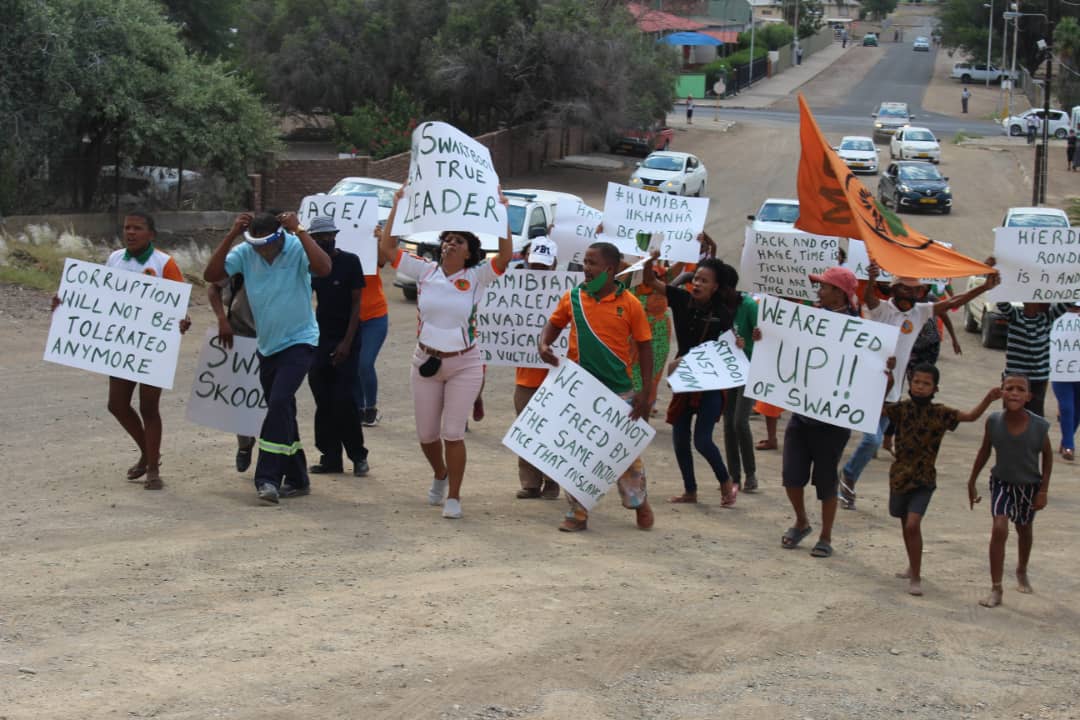 KETMANSHOOP – Landless People’s Movement (LPM) member Stanley IUi#nῡseb said Namibians will lose it all if they continue belittling others and think the country belongs only to some kind of supernatural beings.

This forms part of a petition read on behalf of the party’s supporters during a demonstration held in solidarity with their leaders in Keetmanshoop last weekend.

Citing article one and two of the Namibian Constitution, he reminded government that people are all equal. He also said LPM are regarding the treatment of their two leaders Bernadus Swartbooi and Henny Seibeb as dehumanising, which they regard as totally unacceptable.

The petition further said the Namibian Defence Force, Namibian Police and all other state safety and security agencies are there to ensure the safety of all Namibians – from the President to ordinary citizens.

“All the security forces should not be captured and streamlined to favour a certain political party or whichever certain organisation,” said IUi#nῡseb.

The LPM supporter also said it is disgusting and sad to see lawmakers applauding and ululating for the suppression of the rights of others.

According to the petition, this action, which transpired in the National Assembly on 15 April 2021, is a direct threat to the basic human rights and safety of people and also the country’s hard-won democracy.

It further reads that so many watered their blood for this democracy meant to be for all Namibians and not just for a certain group.

“Let us by all means treasure the peacefulness and upheld our constitutional guidelines and not think that we are above the law and that some corners of this sacred land will be favoured at the expense of others,” IUi#nῡseb cautioned.

He also said LPM will no longer simply watch what happens but will be vocal about the misuse of power and thoughts of superiority.

IUi#nῡseb called on all to honour their leaders and treat one another with the necessary regard of humanity and live in peace.

LPM  leader Bernadus Swartbooi  was escorted out of Parliament,  and  Henny Seibeb  was shoved, carried and manhandled out of the August House during last week’s State of the Nation Address.

Swartbooi knocked off the ceremonial mace from its stand in Parliament whilst Seibeb ripped up a copy of the Harambee Prosperity Plan in front of the President’s bench.