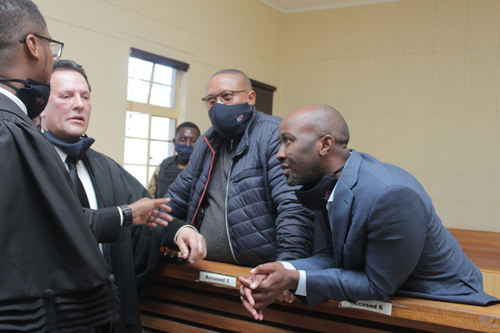 The hopes of former fisheries minister Bernhard Esau and his son-in-law Tamson Hatuikulipi to be released on bail were squashed on Friday when High Court judges of appeal dismissed their application.

Acting judges Herman January and Marlene Tommasi concluded that lower court magistrate Erich Kesslau did not misdirect himself when he refused Esau and Hatuikulipi bail on 22 July 2020.

The judges agreed with Kesslau that the accused disadvantaged themselves when they opted to bring forth their bail application by way of affidavit – in which they did not testify in their defence and many of the issues and allegations that were covered during cross-examination were not stated in their affidavits.

“In our view, the magistrate was correct that there were many unanswered questions to the effect that the appellants did not discharge their onus i.e., that they are candidates for bail,” said the judges.

The court further concluded that Kesslau did not make a finding of guilt but concluded there is a strong prima facie case against the accused.

In July last year, Kesslau denied Esau and Hatuikulipi bail, citing that they played a role in the lingering Fishrot scandal. According to Kesslau, Esau used his position as minister to endlessly allocate quotas to Nengomar and Fishcor – and that further initiated changes in law with the assistance of his co-accused and former justice minister Sacky Shanghala.

He further ruled that despite the State’s failure to prove the accused are a flight risk and will interfere with ongoing investigations, it managed to prove beyond reasonable doubt that there is a strong prima facie case against Esau and Hatuikulipi.

The State also managed to prove there is public interest and the court could not ignore the obvious family link between the accused, according to Kesslau.

In their appeal, Esau and Hatuikulipi claimed Kesslau erred in judgement when he denied them bail on grounds it would not be in the interest of the public or the administration of justice.

They are further claiming Kesslau ignored the fact that investigations commenced in 2014 – and to date, the prosecution has no idea when they will conclude their investigations.

They also noted Kesslau made a finding on their alleged guilt when a bail application does not deal with the question of guilt.

Esau and Hatuikulipi form part of a group that is scheduled to go on trial this year in the High Court on charges of fraud, bribery, corruptly using office for gratification, money laundering and conspiring to commit corruption.

They are to make their first appearance in the High Court on 22 April.  They are accused of acting in common purpose with the intent to defraud the Namibian government by signing a bilateral agreement purporting to be in the interest of Namibia but instead entered into the said agreement for their own benefit.