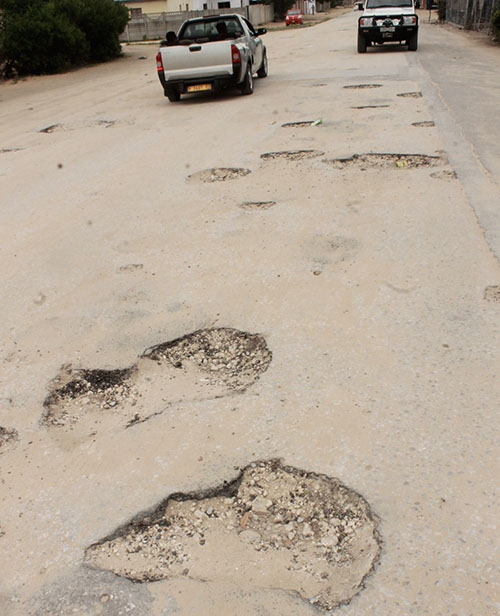 RUNDU – The Road Fund Administration has expressed disappointment in the Rundu Town Council for failing to make use of the N$5.5 million allocated to them to improve the town’s decaying roads.

The council only managed to use 30% of the total allocation for the now-ending financial year.

“As we were driving, I was asking my engineers why the roads in Rundu are continuously in bad shape. Is it that we are giving them little resources, or is it the lack of planning on the town council’s side? Let me be candid. During the financial year, which started on 1 April 2021 up to now, we have allocated about N$5.5 million to the Rundu Town Council to maintain their roads and streets,” said RFA chief executive officer (CEO) Ali Ipinge, who visited Rundu on Wednesday during a site inspection of Roads Authority (RA) projects on the outskirts of this north-eastern town.

“We are now having exactly two-and-a-half months to the end of the financial year and the expenditure on that allocation is 30%, and there are a lot of potholes. Pretty much the whole town, either on bitumen or gravel, they are all in bad shape,” Ipinge stressed.

The RFA CEO said since arriving in town on Tuesday, he didn’t see a single maintenance team.

“People say it’s not always about money. It is a question of what you can do with the limited resources that you have. So, in this case, unfortunately, we start to say that this has not been a good example. N$5.5 million to some people is not a lot of money,’’ he added.

“But if I just do a comparison: Katima Mulilo gets less than Rundu, but the roads are pretty much in good shape. If you go to Tsumeb, they get less than what Rundu gets… So, that is the challenge that was going through my head as I was driving,” he noted.

“And if you show that you can do those things, then money follows. Thirty percent expenditure, and you have got about two months left? What it tells me is that you still pretty much are not going to spend that money,” he said.

“And on the RFA side, what we do with all the beneficiaries of the RFA funding, all local authorities, all regional councils and the Roads Authority and others, is that we only pay out on actual work done. What that means is that we’re not going to give you the rest of the money because you have not done the work, so that is the challenge that we have, but I think we can advise,” he continued.

On a commitment point of view, the RFA financially committed to support the town council on the overhaul of the most damaged road in the town, which is known as Independence Avenue, provided that the town council appoints a reputable contractor to do the job.

Rundu mayor Gabriel Kanyanga said in responce that they currently have no engineers at the council who are supposed to perform and supervise technical staff on roads maintenance.

On Independence Avenue that has been a nightmare to motorists, the mayor said a contractor was identified and is due to start work.

“I realised that as Rundu Town Council, we have a lack of engineers in our staff establishment. It’s a challenge that while we as politicians are trying to push to make sure that things are working, staff members are resigning. The issue of the financial year is also hampering our projects as government’s financial year starts in April and ends in March, while all local authorities’ financial year start in June,” he observed.

“As politicians, we will also be able to ask our technocrats what is going on; money is given, and it is not utilised. We promised our electorate, and as we are gaining experience, we are going to deliver,” he noted.

Works minister John Mutorwa, who was part of the site visits, was unhappy with how things are being handled at the town.

“Mayor, I’m not putting you on the spot. You just came in while the Rundu Town Council started in 1992. But let’s say now everything is being allowed to collapse, and the gravel roads that were there are no more there. Why? Because of funds? You were given N$5.5 million, and you only used 30% of that. But the roads are non-existent. What good are you doing?” Mutorwa asked.

“It’s better to use everything that is availed to you and deal with the issue at hand, and then you proceed to finish the rest. Don’t allow everything to collapse,” the minister advised.