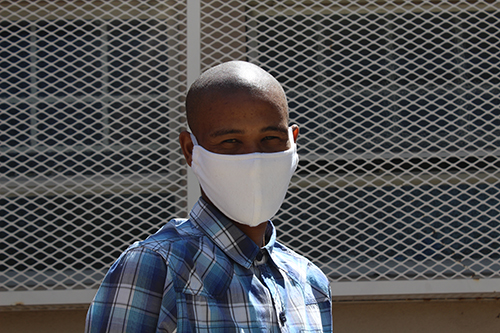 The rape, assault, attempted rape and attempted murder trial of a Windhoek resident, who is accused of 23 offences, including the rape and mutilation of a 10-year-old girl in 2018, resumed this week in the High Court before Judge Dinnah Usiku.

Gavin Gawanab is accused of attempted murder after allegedly strangling the minor girl with intent to murder her, assault with intent to cause grievous bodily harm and a further count of rape of the same victim.

The incidents happened on 26 October 2018 near farm Satan’s Loch in the Windhoek area.  After allegedly violating the little girl, he went into hiding in the mountains surrounding Windhoek, causing a massive manhunt for him. He was on bail for a number of offences at the time of the attack on the minor girl.

It is further alleged that he assaulted another girl near the same farm on 29 September 2018. He allegedly grabbed her by her waist tightly and dragged her, causing injuries.

He also allegedly assaulted another young girl by stabbing her with an arrow and hitting her with his fist on 29 April 2017 in the Havana area of Windhoek, before he proceeded to rape her and rob her of money.

On the same day, the indictment read, Gawanab assaulted another young woman in the same area by stabbing her with an arrow.

The accused is further facing another count of assault with an intent to cause grievous bodily harm after stabbing another young woman on 2 September 2016 in Havana.

On the same day, he also allegedly threatened to stab another girl at the same location.

It is further alleged that on the same day – in the same location – Gawanab forced another woman into a room and made her remove all her clothes under duress, and attempted to rape her.

He is facing further counts of attempted murder, housebreaking with intent to rape and rape, read with the provisions of the Domestic Violence Act for raping another under-aged girl in the same location on 26 September 2015.

He also faces charges of assault by threat and crimen injuria for an incident that happened on 14 May 2013 at farm Oas in the Windhoek District, where he swore at two complainants and threatened to stab them with a knife.

It is further alleged that on 22 December 2012, near Daan Viljoen, in the Windhoek District, Gawanab attempted to rape another minor girl and tried to murder her by strangulation.

He pleaded not guilty to all charges when his trial started in February this year.

The State is represented by Innocencia Nyoni and Gawanab by Mbanga Siyomunji on instructions of legal aid.