Home / We will bounce back - Meyer

We will bounce back - Meyer 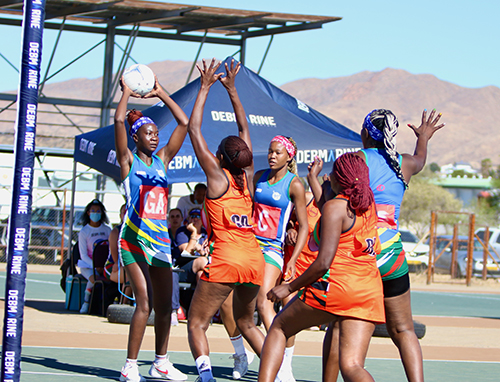 Namibia’s Desert Jewels unbeaten run in the ongoing Debmarine Pent Series Netball Tournament yesterday came to an end after a 43-64 defeat at the hands of a rampant Malawian side at the Israel Patrick Iyambo Police College courts in Olympia.

The Namibian ladies kicked off the competition with a 25-0 walkover win against Kenya on Monday, after the Kenyans failed to pitch up for the match.

On Tuesday, the Desert Jewels registered a strong 53-34 win over Zambia in their second match of the week-long competition and going into yesterday’s encounter against top-ranked Malawi, the Namibians were looking to preserve their perfect start.

But it was not to be for the host nation, as the Malawians ruled the roost across all four quarters, closing in with some intensive play, great ball-handling skills and outstanding composure in front of the goal pole.

The Namibians put up a great fight and demonstrated some inspiring teamwork, but their efforts proved too little to deter the unstoppable Malawian side, which won the first quarter 17-12, second quarter 36-24, and the third quarter 50-35 as they marched to a comfortable win.

The home side kept coming forward with some great play and created a few decent chances, but their overall lethalness at the final end let them down.

Namibian head coach Julene Meyer admitted that basic errors and failing to convert their chances when the moment demanded, partly contributed to their first defeat of the tournament, but remained adamant they will bounce back against Zimbabwe today.

“I’m happy with the girls’ overall performance, especially against a tough side like Malawi. As you know, Malawi is a very physical and intense side, and when you look at how our girls fought back, I’m really impressed by their fighting spirit. There were some basic errors that contributed to the defeat and we were also not taking our chances, but going into today’s match against Zimbabwe, we will work on our mistakes and give an improved performance,” said Meyer.

Action continues today, with Zambia and Malawi opening proceedings at 12h00, followed by Uganda and Kenya at 14h00. Host Namibia will close off today’s matches with a clash against Zimbabwe at 16h00.

Malawi is the highest-ranked side in the competition, as they are currently ranked sixth in the world, with Uganda seventh, Zimbabwe 12th, Zambia 15th, Namibia 24th and Kenya 39th.