Home / Young Warriors can do it, Tunisia is beatable – Nauseb 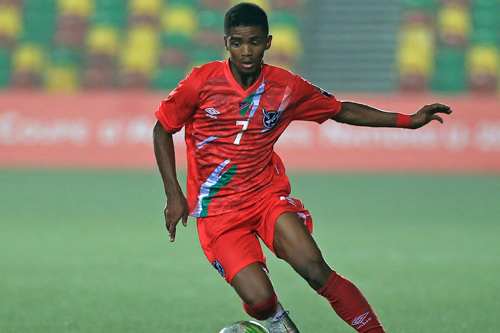 Brave Warriors assistant coach and Namibian football legend Robert Nauseb strongly believes that if the country’s U/20 side, the Young Warriors, emulate Monday’s performance against the Central African Republic (CAR), they stand a good chance of beating Tunisia in tonight’s clash.

The Young Warriors on Monday played to a 1-all draw against CAR during their opening match of the ongoing U/20 Africa Cup of Nations (Afcon) underway in Mauritania. Despite the draw, the Namibian youngsters impressively punched above their weight against the physical CAR side and equally displayed superior ball retention when it mattered most.

But the finishing and composure in front of goal-haunted Namibia on the night as the Young Warriors squandered plenty of goal-scoring opportunities that could have easily seen them walk away with maximum points.
Tonight, the Young Warriors who are in Group B, along with CAR, Tunisia and Burkina Faso, will confront a very tactical and composed Tunisian side in their second group match of the continental youth tournament and Nauseb is convinced the youngsters have what it takes to pull a surprise or two against their north African opponents.

Nauseb is not bothered with the results of Monday’s match but is more inspired by the wholesale performance of the Young Warriors, saying if they continue creating more opportunities in front of goal and ensure they take their chances, beating Tunisia in tonight’s match is possible.
“We played very well against CAR on Monday; the team is eager to win and very composed in few areas. Heading into this encounter, the team will have to replicate the same performance if they are to increase their chances of going into the next round of the competition. It’s not going to be an easy game though, because playing against a tactical team such as Tunisia, one will have to be very cautious at all times. No errors should be made in such games, because the moment you make those errors, you get punished for that. But if we play the same way we played Monday, beating Tunisia is possible,” said an optimistic Nauseb.