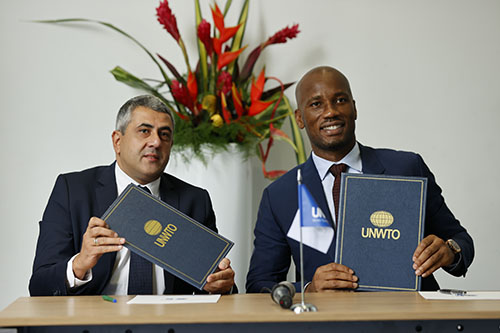 Africa’s Year of Tourism took another fine turn with the celebration of the 41st World Tourism Day celebration in Côte d’Ivoire’s capital, Abidjan.

Before the pandemic, Africa was one of the fastest-growing tourism regions in the world. In 2019, African destinations welcomed 70 million international arrivals, and tourism generated over US$28 billion for African economies.

The World Tourism Day is a Global Day of Observance for tourism. It highlights the importance of tourism to almost every part of our societies and economies.

The African continent was hosting the international event for the third time after Senegal and Ghana hosted the Tourism showpiece in 1983 and 2009.

The country host of these official World Tourism Organisation celebrations typically rotates amongst the 4 regions of the world, and Côte d’Ivoire had the honour to be announced as the host of this year’s event during the 23rd UNWTO General Assembly in St. Petersburg, Russia back in 2019.

Tourism as a key sector needs backing by the highest office of the land to ensure smooth operations and progress. The Government of Côte d’Ivoire’s unwavering support for the tourism industry has seen the west African make the development of key infrastructures a reality.

The country’s ambitious project Sublime Côte d’Ivoire is a testament to how it is committed to making tourism one of its major economic pillars.

The special guest of honour at the event, H.E. Mr Patrick Achi, Prime Minister of Côte d’Ivoire said, “Cote d’Ivoire is proud to host a World Tourism Day like no other. It is important that we realign tourism, so the sector meets the hopes and expectations of people. Tourism is a key sector for Cote d’Ivoire’s growth and development. And the right path for Cote d’Ivoire is also the right path for all of Africa, using tourism as locomotion to drive our economies forward and create jobs for all, especially for women and youth”.

This year’s s celebration couldn’t have had a better theme: Tourism for Inclusive Development – a celebration of tourism’s power to bring everyone together in such extraordinary times. With UNWTO being the force leading the tourism sector recovery, it was the opportune time for the industry to highlight tourism’s incredible power to change lives.

Opening the day, UNWTO Secretary General Zurab Pololikashvili stressed the sector’s “commitment to inclusive growth so that tourism’s restart brings hope for millions worldwide and ensures that everyone who has a stake in tourism also has a say in its future”.

The pandemic as we’ve come to know exposed some of the industry’s complacencies and we hope that the Abidjan gathering will help to build a robust and resilient sector that can withstand the test of time.

UNWTO and Africa: Through crisis and beyond

The UNWTO worked with its members over the last few months on the design of a ” UNWTO Agenda for Africa 2030”. This is a roadmap to make tourism a key pillar of development throughout the continent. The agenda was amended to reflect the new realities caused by the pandemic and UNWTO is working with its Member States to help restart and grow their tourism sectors. This is possible through initiatives such as branding, innovation and investments.

The World Tourism Organisation’s (UNWTO) footprint in Africa continues to grow in leaps and bounds day by day. Zurab Pololikashvili, the recently re-elected secretary of UNWTO, has spent more time in the region than any of his predecessors had a chance to, and projects he initiated in the region have received an overwhelming endorsement from the local leaders.

On the sidelines of the celebration, African football and Ivorian legend Didier Drogba inked an MoU with the UNWTO to help promote youth participation in tourism. The agreement recognises that both sport and tourism can play a key role in advancing many of the Sustainable Development Goals (SDGs), including through promoting cooperation and understanding, as well as through creating frameworks for inclusive economic growth.

The former Chelsea striker speaking to the media after the signing said he will use “his public figure status to help promote tourism as a force for good”.

On the same day, Nigeria’s media giant Channels TV Group also signed an MoU with UNWTO to actively incorporate the theme of tourism for development within its editorial commitments which in turn will help to grow tourism’s footprint in Africa. The group’s CEO Mr John Momoh promised the tourism world his media group’s unfettered support to the industry.

“This is like the icing on the cake for us. I love tourism, I like to travel a lot. Taking into account the fact that we have to reset the button for tourism around the world, that global tourism has taken a hit, you can rest assured that you have a very good partner in Channels TV to continue rising from the pandemic that happened last year,” Momoh said.

Africa’s Year of Tourism will hopefully draw the attention of policymakers to work towards a unified industry to eliminate all artificial bottlenecks that are hampering the growth of tourism in the region. As the new Chair for the UNWTO Commission for Africa (CAF), Mr Siandou Fofana should help champion the pertinent needs of the continent.