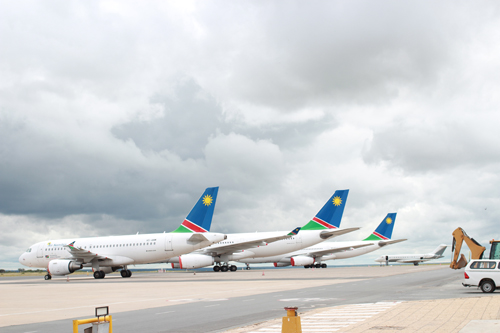 Finance minister Iipumbu Shiimi yesterday emphasised that Air Namibia’s current debt was unsustainable and would jeopardise the national economic recovery plan that the government is currently seized with.
Shiimi, who was responding to a motion tabled by Democratic Popular Movement (PDM) leader McHenry Venaani on the status of the troubled national airline with a particular emphasis on its planned liquidation, said the decision taken by Cabinet is in the long-term interests of the country.

He said this takes into consideration the loss-making history of the national airline.

Shiimi stated the net economic costs of Air Namibia’s operations far outstrip the net gains and are thus unsustainable. It is estimated that so far, the government has spent more than N$8 billion on Air Namibia.

“At this stage, the country’s economy can no longer afford to perpetually provide financial support to Air Namibia at the expense of supporting economic growth and critical social services. It is, therefore, with that consideration that the government decided to file for the voluntary liquidation of Air Namibia,” he said, adding that the government considered all other options, which included engagement with other airlines for potential investment or partnership.

Equally, he added, the government has also assessed various business plans to turn around the company.
But Shiimi said he was surprised that some trade union leaders claim they were never consulted on Air Namibia’s liquidation, while the reality is that government had several meetings with unionists representing Air Namibia employees.

“We have also made representation to senior representatives of the National Union of Namibian Workers (NUNW). It is very surprising to hear that the unions are claiming that they were not consulted, while they already by July/August 2020 knew that the government had decided that Air Namibia was no longer affordable and it should therefore be liquidated,” he reacted.
Shiimi further clarified that the government has been legally advised that the Public Enterprise Governance Act of 2019 was fully complied with.  He admitted that it was a difficult decision, taken after careful consideration of the various options to save the national airline.  He explained that all options assessed point to the fact that the national airline is not profitable and it has not been profitable since its inception.

“It appears that people confuse the money that government has to pay to the owners of the aircraft that Air Namibia is leasing and for which government has provided guarantees in the past. This money would have to be paid, whether or not Air Namibia continues with operations or is liquidated,” he said.

However, he rubbished claims that the decision to liquidate Air Namibia is linked to a desire to promote a private airline.
Prime Minister Saara Kuugongelwa-Amadhila said the notion that there was an oversight in handling the Air Namibia issue is untrue. She said the liquidation is regrettably the only best option but government doors remain open for anyone to bring forth any input or solution.
“We have all the information available, but if a person says I have something to say, I will say bring in the information,” she noted.

Mines and energy minister Tom Alweendo said the liquidation did not come as a surprise. “Our real leadership is tested more when dealing with issues that have consequences and are impactful to the lives of people. The Air Namibia issue is one of those issues that will test our true leadership. It’s in times like this that we need to step forward. The decision was not easy to take. It was taken after due consideration of the matter and a lengthy agonising period and having weighed all consequences of such a decision,” Alweendo said.
-anakale@nepc.com.na