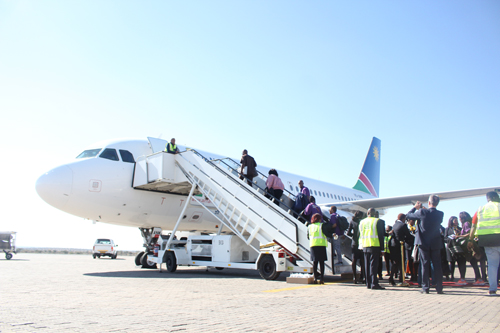 As the nation continues to express dismay, as many do not agree with the government’s announcement on the liquidation of Air Namibia, stakeholders in the tourism and hospitality industry feel such a move will adversely affect the lucrative sector, which is one of the biggest contributors to the country’s GDP.

Latest statistics indicate that the travel and tourism sector contributed 11% to the GDP in 2020.
Environment and tourism spokesperson Romeo Muyunda has described the situation with Air Namibia as sad.
“The airline carried the Namibian flag and was part of our pride as Namibians. Furthermore, the airline has been a major stakeholder in the development of tourism in the country. The impact of its liquidation will be felt by the tourism sector mostly,” Muyunda expressed.

It is for this reason, he said the ministry is calling upon the sector to restrategise and use available avenues to bring tourists to Namibia.
“We understand the decision was not a simple one but had to be done. As painful as this may be, we move forward by standing up to the challenges this may have presented to the sector, the country, and the economy in general. Tourism needs to be resilient now more than ever,” Muyunda said.

The chief executive officer for the Hospitality Association of Namibia (HAN) Gitta Paetzold feels although it may not have come unexpected, the tourism industry has been waiting anxiously for the shareholder’s decision on the national carrier.

She said there had been many special meetings, Cabinet debates, requests for new business plans and the hanging sword of the legal battle over the lease of the aircraft threatening Air Namibia for years now.

“The actual announcement of the decision to liquidate did come as a shock at the end. Maybe because there always remained an element of hope that at least the national and regional routes could be upheld and the national carrier carries the Namibian flag in this way,” Paetzold noted.

She emphasised it must be remembered that while the national carrier was a very expensive undertaking, the airline did much more for Namibia than carrying passengers to and from Namibia to destinations nationally, regionally.
Paetzold cited destinations such as South Africa, Botswana, Zimbabwe and even Zambia as well as the flagship link to the heart of Europe - Frankfurt where the main tourism source market for Namibia is.

She praised Air Namibia has thus been the loyal and committed air link to the world for the past three decades.
“In the 1990s, Namibia saw the likes of international airlines, such as UTA, LTU (which then converted into Air Berlin), Lufthansa and Condor come and go, depending on the shifts and trends of the international market moving to other more lucrative markets at a whim. While our Air Namibia remained dedicated to Namibia, doing huge marketing for this country as a travel destination abroad carrying cargo, such as Namibian beef, fish, and other commodities, and contributing largely to bringing international media and tourism agents to Namibia on a fact-finding mission to promote Namibia as a travel destination of choice,” Paetzold maintained.

However, she said recent times have put huge pressure on all airlines across the globe even before the coronavirus pandemic, which may just have been the last nail in the coffin for Air Namibia.

She noted Namibia and the tourism industry has called for open skies for years and HAN was happy to see the additional airlines such as Ethiopian Airways, Qatar, KLM, Condor, and Eurowings fly to Namibia thereby expanding the air access to the country.
“We in tourism can only hope and trust that the very promising announcements by Eurowings to expand its routes to Namibia to 5x a week by April, and the return to Namibia by Condor and Qatar, as well as Ethiopian Airways’ link, will remain constant over the next months and years to fill the void left by Air Namibia,” she hoped. –anakale@nepc.com.na