Home / All systems go for ‘Together as One’

All systems go for ‘Together as One’ 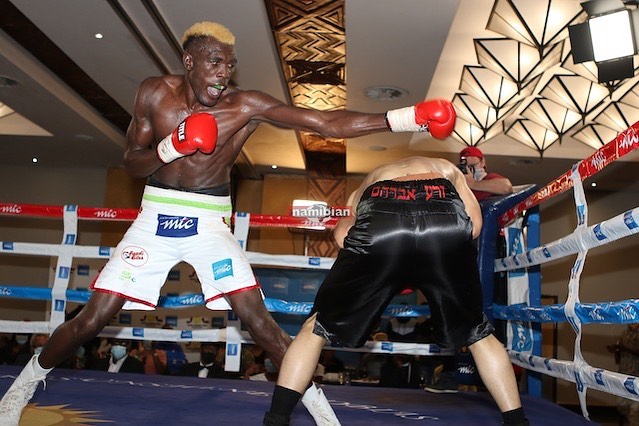 Everything is ready for the ‘Together as One’ Part 4 boxing bonanza on Saturday, says promoter Nestor Tobias.

The bonanza will be headlined by Paulinus ‘John John’ Ndjolonimus and Anthony Jarmann, who will exchange leather in a rematch. Earlier this year, Ndjolonimus, who boasts a record of 12 fights with 12 wins, beat Jarmann, who has 22 fights, with 17 wins, one draw and four losses, to claim the WBO Africa super middleweight title.

Another exciting fight on the night will be between Charles Shinima and Tanzania’s Mohammed Muta in the World Boxing Organisation (WBO) Africa welterweight 10-rounder.

In terms of logistics, the award-winning promoter said the stage is set.

“Logistics surrounding the event is well prepared and we are just waiting for the head of state to address us on Thursday; perhaps we will be lucky and get an increased number of people who can attend the event,” he said.

On the readiness of the boxers, Tobias said all of them are ready and raring to go, adding they have been preparing well, and are mentally and physically ready for Saturday.

“I know they have been putting in a lot of work. Most of them have spent almost two months in training, and I think for now there is nothing to talk about but their readiness to exchange leather,” he said.

Another exciting fight to look forward to is between Philipus ‘Energy’ Nghitumbwa and South Africa’s Innocent Mantengu in a 12-rounder WBO Global super bantamweight fight.

Nghitumbwa earlier sent a direct message to Mantengu that he will knock him out in round nine, as this is a great opportunity to become a world star.

“My preparation went very well and I had the best team in the world; there is no way I can let this fight slip away from my team and my country,” he was quoted as saying in a statement.

Also on the card is Jeremiah Nakathila, who will take on Tinashe Mwadziwana from Zimbabwe in an international lightweight title bout scheduled for eight rounds.

Meanwhile, Matheus Heita will take on Julius Sheefeni in a national super bantamweight slated for 10 rounds.

General tickets are pegged at N$400 per person, while a table for eight people with wine will go for N$12 000.

The event will be live on Namibian Broadcasting Corporation (NBC) and MTC social media platforms.