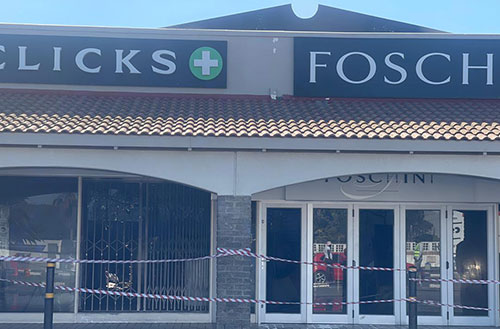 WALVIS BAY – Firefighters at Swakopmund yesterday battled a fire which engulfed the Shoprite complex during the early hours of Wednesday.

The fire caused extensive damage to the Foschini and Markham stores, while surrounding shops experienced excessive smoke. “It started around 00h00, and we tried our best to stop it from spreading further around 04h30 this morning.

“We, however, went back at 06h00 to make sure that it was completely out,” he explained yesterday.

Matengu indicated that they do not know at this stage what the cause of the fire was and that an investigation is currently ongoing.

Erongo community affairs commander, Inspector Ileni Shapumba, yesterday also told the media that a security guard who was guarding the premises in the evening noticed that an alarm went off at Pep Stores in the complex, and went to inspect.  According to Shapumba, the guard noticed during his inspection that all the lights in Foschini were on, and that there was smoke coming from the roof.

“The smoke was coming down the wall separating Foschini and Markham. The guard then notified the G4S control room, who in turn notified the police and the fire department,” the officer added.