China a model of poverty alleviation 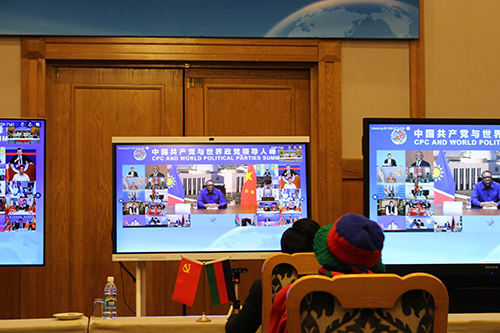 “To win the fight against poverty, the key lies in targeted measures. We should take into consideration local conditions, and apply different measures for different villages, households and individuals,” Geingob said on Tuesday.

He said this in a virtual address to the Communist Party of China (CPC) Central Committee and World Political Parties Summit.

He said Namibia has adopted
its unique strategy of addressing poverty at the grassroots level, through the concept of town hall meetings.  Geingob said by visiting
all 14 regions and sitting for an average of six hours, together with his team that consists of the prime minister and Cabinet ministers, they directly engage with the people by answering their questions on the spot – and where the questions require research, the answers are provided later via the offices of the regional governors.

“I am pleased to note that China has succeeded, 10 years ahead of schedule, in meeting the first target of eradicating extreme poverty as per the UN 2030 Agenda for Sustainable Development,” Geingob said.

In this regard, Geingob said, he has reflected on China’s state council’s information office’s narratives on China’s experience and contribution on poverty alleviation and noted some contextual insights for developing nations such as Namibia.

He said the key relevant lesson for Swapo, which has formally adopted the ideology of “socialism with Namibian characteristics”, is encapsulated by the late Chairman Deng Xiaoping’s statement that “poverty is not socialism; socialism means eliminating poverty”.

Thus, he said, moving forward, he intends to draw lessons from poverty alleviation strategies, such as the four-plus two system, which refers to the democratic policy-making process on village affairs under the leadership of village party organisations.

“Four means four steps: (1) four proposals should be put forward by the party branch, (2) jointly discussed by the village committee and the party branch, and (3) deliberated by party members, and (4) resolutions should be adopted by villagers’ representatives,” said Geingob.

Therefore, he said, results should be made known to the public. Geingob also said studying strategies, such as the four-plus two system, and applying it in tandem with the local concept of town hall meetings, will enable Namibia to increase the participation of the previously disadvantaged in the decision-making and implementation process in the battle against poverty.

Geingob also used the opportunity to express Namibia’s appreciation to Jinping, the CPC and the government of China for the donation of 100 000 Sinopharm vaccines and retailing of 150 000 vaccine doses.

“We are currently going through a third wave and the most difficult phase of our war against Covid-19,” he said, adding that in the true spirit of all-weather friendship, China has come to Africa and Namibia’s aid at this hour of need.

“The Swapo party government reaffirms its commitment to work closely with the Communist Party of China and the government of the people’s republic of China, towards the achievement of a shared future of prosperity for our citizens,” he said.