Convicted paedophile says he is sorry 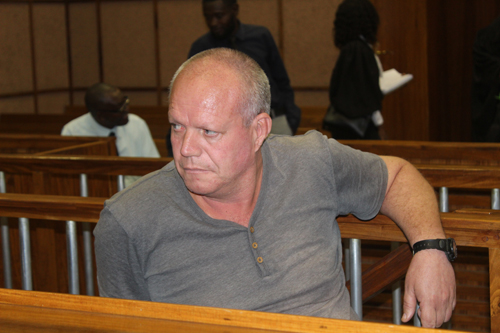 A South African-born man, who was convicted of raping two under-aged girls and human trafficking charges, yesterday told Deputy Judge President Hosea Angula he is “sorry for what he has done”.

Marthinus Pretorius was testifying in mitigation of sentence after he was convicted in November last year.
During his conviction ruling, Judge Angula found that Pretorius (49) received the two girls in question – then 13 and 14 years old, respectively – at his house at Swakopmund for the purpose of sexual exploitation – and as a result, he was guilty of human trafficking in terms of the Prevention of Organised Crime Act.

According to the judge, as a former police officer, Pretorius should have known it was an offence to have intercourse with minor girls.
Pretorius pleaded guilty to six counts of rape when his trial started, but however pleaded not guilty to six counts of child trafficking and said the girls were brought to him or came on their own free will – and he never detained any of them at his house.
The judge rejected the defence of Pretorius that the girls had gone to his house voluntarily and agreed to have intercourse with him for money, and that he did not detain them at his house against their will.

Pretorius yesterday said he accepted the court’s decision and will abide by it. He, however, apologised profusely to the victims and their families, as well as the Namibian nation and the court.

He admitted to having wrongfully and unlawfully committed a sexual act with a female minor, who was 13 years old at the time, on five occasions in May 2012 and that coercive circumstances were present in that the complainant was under the age of 14 years, that he was more than three years older than her and is thus guilty of the charge of rape.

He further admitted to having committed a sexual act with another minor female, aged 14, during June 2012 and that coercive circumstances were present in that the complainant was 14 years old at the time and was exceptionally vulnerable because of her age.
He further stated that on two occasions, during May, the first complainant was accompanied by Johanna Lukas – and on the other three occasions, she came alone.

Lukas was already convicted by Judge President Petrus Damaseb and sentenced to 13 years in prison in 2015. Pretorius was charged with 13 charges of rape and human trafficking, alternatively committing a sexual act with a child below 16 years of age for allegedly defiling three minor girls while he was attached at the Rössing mine in 2012.

The State, however, withdrew the charges for the third complainant, as it came to light that she was 18 years old and was coerced by her mother to engage in intercourse with Pretorius in exchange for money.
Pretorius managed to flee to his native country, South Africa, after his alleged devious schemes to “buy” young girls from a Swakopmund woman for his perverted sexual pleasures was uncovered.

He was arrested in Johannesburg during March 2016 after the Namibian authorities asked the South African authorities to extradite him to Namibia to stand trial on his alleged misdeeds.

He was only extradited to Namibia in December 2018 due to the long extradition process.
The matter will return to court on 13 April, with Pretorius’ daughters expected to testify in mitigation.
Pretorius is represented by Zacharias Grobler on instructions of legal aid and the State by Felicitas Sikerete-Vendura.
- rrouth@nepc.com.na