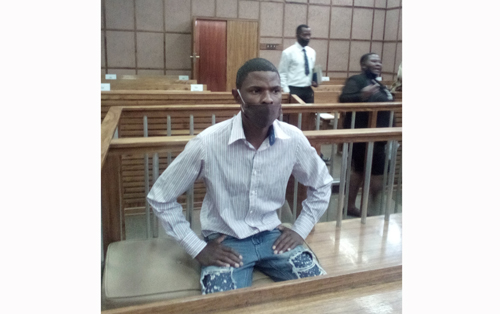 A resident of Tses in the Keetmanshoop district, who claimed during his plea on two murder and three attempted murder charges that he was too drunk at the time of committing the offences to remember what transpired, was sentenced to 50 years imprisonment yesterday.
Windhoek High Court Judge Claudia Claassen convicted Renaldo Goliath (31) on two counts of murder, one count of attempted murder and two counts of assault with intent to do grievous bodily harm (GBH).

He was convicted of stabbing to death Samuel Jossob and Julius Kenneth Hangue, and attempting to murder Chedric Raymond Williams, as well as assaulting Alfred Frederick Kisting and Remantha Hill with intent to cause them grievous bodily harm.
The judge, however, found him guilty of assault GBH on the charges related to Kisting and Hill.
He entered pleas of not guilty on all charges, except for the murder of Hangue to, which he wanted to plead guilty, but did not admit intention to kill and the judge entered a plea of not guilty.

According to the indictment, the accused was at a nightclub in Tses during the late night hours of 27 April 2012 and the early morning hours of 28 April 2012, armed with a knife, and started randomly stabbing patrons at the club.
He first stabbed Jossob three time in his head, back and chest area, causing him to die from his injuries.
He then stabbed Hangue in the neck, causing him too to die from the stab wound.

It is further stated that Goliath then tried to kill Kisting by stabbing him all over his body, but only managed to stab him in the arm, whereafter he stabbed Williams in the area of his eye.
He then stabbed Hill in her chest/shoulder area, it is further stated.
Judge Claassen sentenced Goliath to 25 years each on the murder counts, seven years on the attempted murder and three years each on the assault.

She, however, ordered that the sentences on the attempted murder and assault convictions run concurrently with the first murder sentence, leaving Goliath with a 50-year sentence.

According to the judge, Goliath showed very little remorse, while he disputed all the charges, except for the murder of Hangue. She said both victims lost their lives unexpectedly.

She further said Goliath was overly aggressive and not provoked by any of his victims. However, the judge said, the stabbings all occurred on the spur of the moment and was not premeditated.

“The victims were just at the wrong place at the wrong time,” she stressed, adding that Goliath had no regard for the safety of the community, which is entitled to feel safe without being stabbed by random criminals.
She said his actions are deserving of him being removed from society for a lengthy period.
Goliath was represented by Jermaine Muchali on instructions of Legal Aid and the State by Basson Lilungwe. - rrouth@nepc.com.na